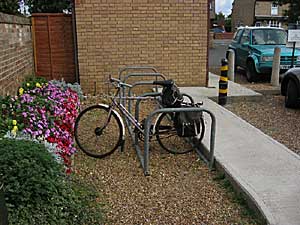 When I make an occasional trip to the council offices here in Ely, I leave my bike in the handy bike racks. Imagine my surprise when I went there a couple of days ago to find that a concrete walkway had been built against the racks. So today I took my camera when I went into town. You will see the depth of the walkway. Before it was built, a bike could simply be pushed into a rack. Now one has to come round the end, and I had to reverse my bike in. I suppose one could lift one’s bike over the walkway! I have no idea why this elevated walkway was built where it was. 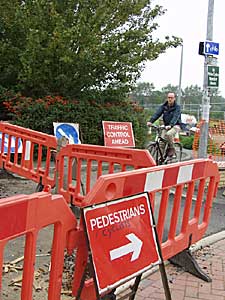 The construction of the new segregated cycle and pedestrian access to the West Cambridge site has finally begun, more than three years after we first went to look at the plans. The section next to the Cavendish Laboratory (the Physics Department) is nearly complete, and a raised table has been constructed where the new path will meet Adams Road. The pavement has been moved to the opposite side of the cycleway, to reduce conflict between cycles and pedestrians, and the cycleway will now be wide enough for overtaking to be comfortable. When the West Cambridge site is fully occupied, this path might carry more cycle traffic than any other in Cambridge.