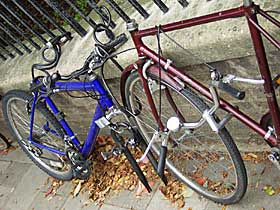 Operation Cyclone, which is the Cambridge police operation covering all things cycle-related, announced in September that clearance of abandoned bikes was about to take place in the city centre. We welcome such a move, although the City Rangers have been clearing abandoned bicycles for years.

We agree that removal of abandoned bikes is a good thing, because it keeps streets, railings and cycle parking clear for active users. Several concerns have been raised about the clearance, however.

These are all points that we would have made had we been contacted in advance. We would like think that the police would be open to discussing proposals like their sweep of abandoned cycles in advance with interest groups such as ourselves. Not only would this help ensure that problems are minimised, but would give additional publicity to a valuable scheme, publicity we are happy, as now, to give.