Cycling on Friday evening was amazing. As the sun set, two pictures appeared on the horizon. To the south west, the earth and sky fused in a stormy haze; to the north west a brightness that caused the trees to silhouette against the welcoming hills. 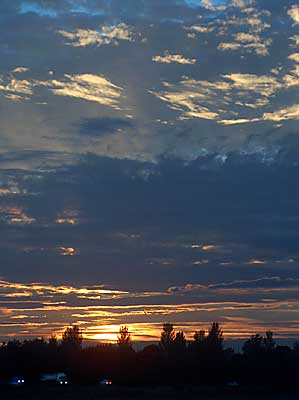 The red basin of the setting sun appeared like a bowl in a glowing kiln. As it continued to set, the clouds appeared like broken glass and, as the night increased, it became increasingly difficult to concentrate due to the glaring headlights of oncoming vehicles unable to see my bike light until they were parallel to me.

And then the blackness. My front light gave out – a frightening experience worse than the contrast of light to dark as I left each town. I tried to rest at Oakham station but it was cold and draughty.

Eventually I slumbered, after securing my bike in a wooden bus shelter, just before Melton Mowbray.

The morning was a contrast to the evening. Fauna and flora slowly awakening and the light increasing behind me until suddenly it was day. In the evening, cars had hurried past me taking people home from work, villagers had taken their evening stroll and curtains had closed against the night; now the curtains opened, more walks were taken but with a purpose, collecting the paper or going to work.

I arrived at my daughter’s for breakfast, a bath and a comfy bed. And cured of wanting to cycle the 24 hours ever again.