This article is reproduced with thanks from the excellent A to B magazine (www.atob.org.uk). A to B magazine specialises in folding bicycles, electric bicycles, bicycle trailers and car-free alternatives of all kinds.

The local transport plan for Cambridgeshire gives £4M for pedestrians and cyclists combined. The current population of Cambridgeshire is 550 000. This works out as £1.45 per person per year to be spent on pedestrian and cycling provision. By way of contrast, Amsterdam recently announced that it is to spend €100M on cyclists in the next five years. Their population is 730 000, so that works out as €27.39 or £18.86 per person per year. It is still hardly a fortune, but it makes a huge difference.

Cycling policy gets little enough coverage in transport circles, let alone in the wider world of the media who love ‘big’ stories. This is despite the fact that increasing amounts of money have become available over the past few decades, spawning a whole new sub-industry. Predictably, the world of cycling investment has developed its own jargon, with money going into either ‘hardware’ or ‘software’, or in plain English, physical measures (e.g. paths, bridges and parking) and measures attempting to alter travel behaviour and attitudes (e.g. the Travelsmart scheme and various tax incentive and travel allowance schemes).

It’s the former that have caused most controversy in the small but lively world of UK cycling discussion groups and forums, the debate centring particularly on Sustrans-style traffic-free routes and often bizarrely isolated local authority cycle lanes. Some cyclists saw Sustrans style routes as a precursor to removing cyclists from the road altogether. Better, they said, to put funding into making roads safer for cyclists; but whilst railpath routes were springing up in every corner of the UK it seems the ‘push’, such as it was, to allot road space to cyclists and control cars ran into the murky but powerful force of the motoring lobby and Tony Blair’s Middle England focus groups. The good news is that from a starting point of virtually zero in the early ’80s, when there was no real concept of investing in cycling provision, funding has increased dramatically and cycling now at least appears on the local government agenda, if only as paper commitments in Local Transport Plans. Unfortunately, whilst funding has generally risen, national cycling targets, like the unhappy dodo, have arrived, trotted around pointlessly and shuffled off their mortal coil. Meanwhile in Copenhagen the Danes claim to have increased (already high) cycling levels by 20% over the last six years alone. With previously undreamed of cash available in the UK, where are we going wrong. And what’s the Nordic secret of success?

Is Enough Being Invested?

The Treasury’s own figures for 2005-2006 show it expects to collect the tidy sum of £519 billion (£519,000,000,000) in tax revenue. Of this about £20 billion is spent under the general heading of transport – in other words, less than 3.9%. As you might expect, crucial areas such as benefit payments, social services, the health service and education alone account for a whopping £327 billion, but transport is just about bottom of the pile, even outstripped by our annual debt interest repayments of £26 billion. The amount to be spent by local authorities on cycling-specific measures is a relatively paltry £63,000,000 (source: National Cycling Strategy Review) – some 0.3% of the total transport budget and an infinitesimal 0.01% of total tax revenue. Whilst these are approximate calculations – the more one looks at the figures the less clear it becomes exactly what money is going where – it’s pretty clear that specific cycling schemes barely register in terms of the national piggy bank. Indeed, much of the DfT budget goes into measures that are positively harmful to cyclists and society in general – costs on a single road construction scheme can often exceed the £63 million national cycle spend.

Cycle spend per head of population is perhaps a more helpful measure. The average Local Transport Plan capital spend on cycling in England and Wales is about £1 per head per year, although figures vary from 6p to £7. (Source: English Regions Cycling Development Team spending analysis 2001-2006.) According to Lyn Sloman, National Cycling Strategy Board member, evidence from European cities that have successfully increased cycling suggests they have typically spent around £5 per head per year for an intensive 10 to 15 year period, making cycling easy, convenient, safe and attractive.

Spending more doesn’t always produce better results. Hull is not one of the highest spenders, spending on average just under £2 per head per year, yet it is among the most effective local authorities in raising cycling levels. Costs can vary wildly; evidence suggests Sustrans off-road paths are cheaper than local authority ones, due to a number of factors – Sustrans is a not-for-profit organisation, it uses small contractors it knows well, and it usually produces accurate costings. The emphasis on one-off ‘capital’ projects and a lack of provision for maintenance is also a common criticism of funding; money is spent on projects which are never properly promoted, cleaned or repaired and so remain under-used.

Some specific schemes clearly buck this trend; Safe Routes to Schools seem to be popping up all over and are partly funded by the Department for Education and Skills. More questionable ‘flash in the pan’ schemes include a £600 000 grant from the Strategic Rail Authority as a contribution to building better cycle parking facilities at stations, and £50 000 government funding to the Cyclists’ Touring Club to establish a cycle training advisory service. Surely common sense would suggest that established funding channels are more effective, provided the expertise is there at the receiving end? The ‘scheme’ mentality seems more about generating publicity than producing results. By its very nature it isn’t suited to the long-term, often small-scale effort that cycling thrives on. 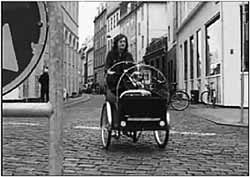 This is one of Sustrans’ flagship railpath projects, and the second busiest railpath in the UK. Keen to avoid the ‘boring’ stereotype of viewless railpaths, it was deliberately designed with rises, open vistas and characterful sculptures including the much loved scrap metal sheep. Its construction generates thousands of cycling and walking trips in a densely populated area where the traditional woollen industry had collapsed and car-hungry service industries and home builders have moved in to create some of the worst congestion in the country, all but wiping out cycling as a form of daily transport.

Construction costs were £730 000 for an 11 km route, or around £63 000 per kilometre. Road safety campaigners Brake quote an average figure for cycle lane construction of £5,000 per kilometre for on-road schemes (most UK schemes are simple ‘white line’ jobs, making even this seem expensive) and £65,000 to £75,000 for off-road schemes, making the Spen Valley path good value in relative terms. Maintenance comes in at about £25,000 a year (£10,000 to Sustrans for bridge maintenance and other structural checks and £15,000 on general maintenance, including the employment of a part-time ranger). On any kind of value-for-money rating this has to be good news.

City of York Council has adopted a ‘carrot and stick’ approach, investing in a cycling infrastructure that is coherent, safe and designed to tempt motorists out of their cars, whilst at the same time attempting to impose car control measures. Despite having one of the most comprehensive, well-funded and detailed cycle infrastructure policies in the UK, York’s lead cycling officer, Andy Vose, is commendably honest about the difficulties involved; he admits that by his authority’s own calculations cycling trips have not increased to the degree seen in Copenhagen (cycling levels over recent years in York have held steady at around 15-20% of trips). There are strong parallels with Copenhagen. The massed ranks of cyclists familiar in most British cities in the 1940s were never completely extinguished here by the road and traffic nightmares from the 1950s. In the 1980s, a new political will in York led to the adoption of a continental-style plan for a network of cycle routes. 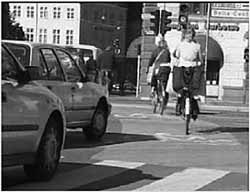 This year York expects to spend £700 000 on specific cycle schemes; around £3.90 per head and very close to the per capita figures for Copenhagen. Where then is the difference? Andy highlights the fact that the politically more acceptable parts of the network are in place, including 80 km of off-road route, a figure far greater than Copenhagen’s green routes. Flagship projects such as the Millennium Bridge and the ‘magic roundabout’ (reduced car entry speeds and coloured cycle lanes nearer the centre of the roundabout) have been generally recognised as contributing to more and safer cycling but City of York Council must now fill in the ‘difficult bits’. This means potentially altering major road junctions causing greater car congestion and greater unpopularity. This has been further muddied by the new Traffic Management Act which is seen to punish anyone actively increasing traffic congestion. Here in the UK, it seems it is still the car’s popularity, one way or another, that stands in the way of the bike.

Where there are heroes there are also villains. Some local authorities have been quite shameless in their treatment of cycling funding. Some, like Bradford, have not even tried to hide their anti-cycling bias and political pressure from certain councillors has led to a budget of nearly a quarter of a million pounds being drastically reduced. Elsewhere the post of cycling officer is often seen as a temporary one, with cycle policy being picked up and dropped at will by local authorities. In a word the whole thing is expendable. 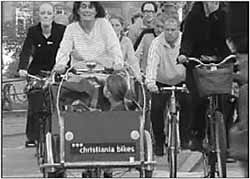 Even more morally reprehensible is the practice known as virement. It involves diversion of money gained with the stated aim of building cycle infrastructure into other areas. During the construction of the Trans-Pennine Trail this was a major issue between those funding the trail and East Riding of Yorkshire Council. In the end the issue was fudged as it was judged, understandably, that the trail would remain unfinished for months if not years if the council was taken to task. If the same rules applied to cycle policy as to education, many authorities would find themselves in ‘special measures’ with infrastructure under the charge of external bodies. Too much carrot and not enough stick?

Despite steadily increasing car use over much of Denmark, Copenhagen claims an increase in cycle use of 20% over the last six years. This figure is pretty believable when you consider the scale and nature of the projects undertaken. The annual Copenhagen cycle infrastructure budget is €3 million, or around £4 per head of population and a truly staggering 20%-25% of the road budget from which it comes. €1 million of this sum goes simply on cycle track maintenance, coincidentally also the figure quoted to build just one kilometre of cycle lane. The city boasts 323 km of roadside cycle lane and only 32 km of ‘green’ routes away from motor traffic.

Although the amounts spent are actually close to some UK budgets in terms of spend per head, money clearly isn’t the only key to success; more telling is the whopping proportion of the road budget spent on cycling and the unbelievably astronomical figure the city quotes for cycle track construction. This is for a ‘typical and traditional’ Danish roadside cycle track, with kerbs on both sides, separating it from pedestrians and motor traffic and may even involve relaying the drainage system. The feeling of security this gives has proved very effective in tempting Copenhageners away from their cars.

The Danes have been making this type of investment consistently since the early ’80s and their ‘proper’ cycle track tradition actually pre-dates the postwar cycling slump, going back to around 1910. Their targets also show a thoughtfulness rarely seen in the UK; Copenhagen aims to decrease the risk of cyclists being injured by 50% and to increase average cycling speed by 10%: ie cycling should be safe, direct and fast. These trends are very positive, in stark contrast to the UK, where cycle use has fallen and government figures suggest it has become relatively more dangerous for cyclists to travel on our roads.