Do you remember the survey you filled in? (Part 1)

It’s been a marathon effort, but we can now bring you a summary of the results of the questionnaire many of you filled in a year ago. Thanks to everyone who helped with this over such a long time: the compiling team, the data inputters, Simon for his analysis of the results and preparing the diagrams, and all of you for returning so many of the forms.

We’re covering the results in two parts – so the rest of this article will appear in April.

Although it was as far back as 2001 that an AGM voted to hold a members’ survey, it proved such a complex task that it was not until autumn 2004 that the 8-page, 56 question paper-based survey was produced. It was sent out to all 700 members at the time and yielded 293 responses, i.e. 42%, a rate which reflects the enthusiasm of the membership.

The survey started with questions about the members, their bikes, where they ride and why, and what they think about Cambridge for cycling. Then (to be covered next time) sections about the cycling bans, with perhaps surprising responses, a section about interactions between cyclists and motorists. Finally members were asked to say how the campaign should continue to engage with ‘the authorities,’ again covered next time.

The committee apologies that, though the Freepost address was provided, reply-paid envelopes were not included with the survey forms as we had intended.

Users had until the end of December 2004 to return their survey forms. 293 forms were received by that date. Only those are included in this analysis.

We hired a private contractor to encode the multiple-choice answers into a spreadsheet. Each survey was uniquely numbered and the style of the encoding makes it easy to verify and check the spreadsheet against the paper copies.

There were several questions that expected an open ended textual answer. We analysed the first 100 of these for this report to get a sample set of responses for statistical purposes.

The multiple choice and textual answers were then combined into a single spreadsheet. Spreadsheet tools enabled most of the responses to be easily combined into charts.

Section A: About you

We confirmed that 99% of respondents said they were members of the Campaign.

Almost one quarter of respondents are supporters of Sustrans, and one in 6 members of the CTC. Much smaller numbers are members of 17 other cycling groups. 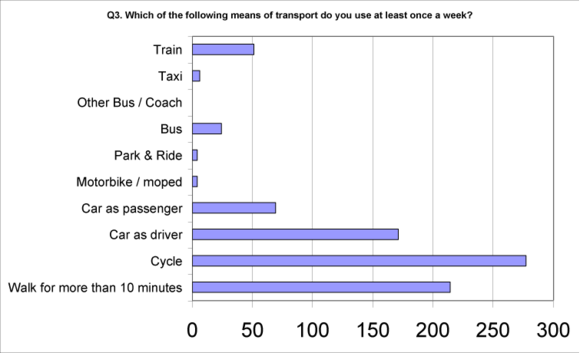 Although almost all respondents are regular cyclists, well over half drive and even more are regular walkers. One in six use trains at least once a week, but this is twice as many as those who use buses. Very few members make regular use of Park and Ride, coach, motorbike or taxis. 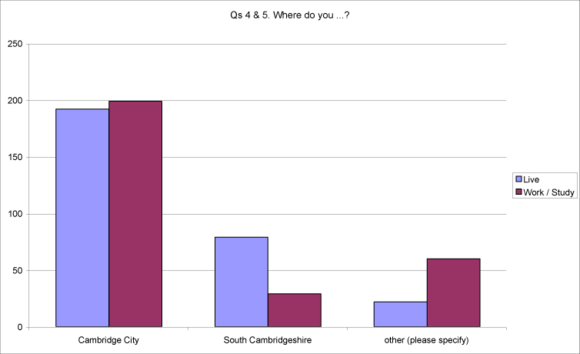 Almost two-thirds live in Cambridge, and a further quarter in South Cambridgeshire. Most of the rest live slightly further away in East Cambridgeshire or surrounding counties.

Two-thirds work or study in Cambridge, but only one in ten work in South Cambridgeshire. The remainder are roughly equally split between being retired, working in London, or working in a nearby county. 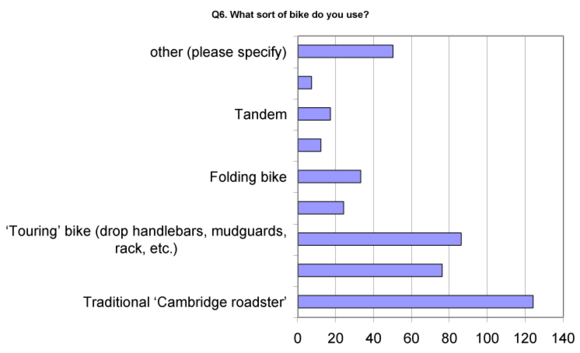 When asked ‘What sort of bike do you use?’ the predominant response was traditional Cambridge Roadster, followed by ‘Touring Bike’ and then ‘Mountain Bike’. A third of respondents have the use of more than one bike. 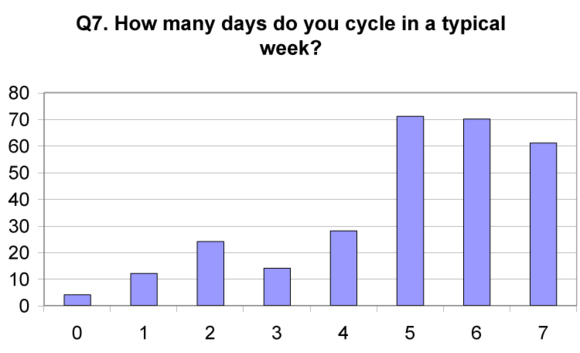 Two thirds of respondents cycle five or more days a week, and the median distance is between 10 and 20 miles per week. 43% always wear a helmet; 30% never do. A quarter owns some kind of trailer or child seat and another one-sixth accompany children. 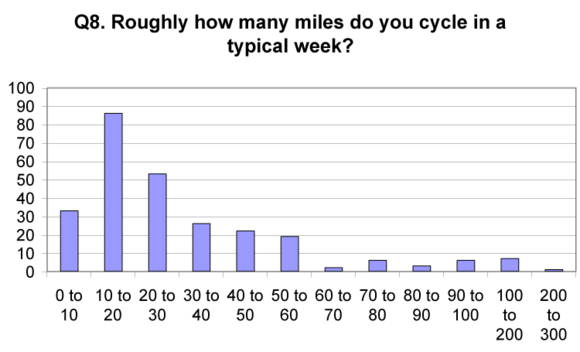 Over 90% have a driving licence and three-quarters of respondent’s households have a car (though this latter figure must acknowledge that many respondents will be members of the same household). 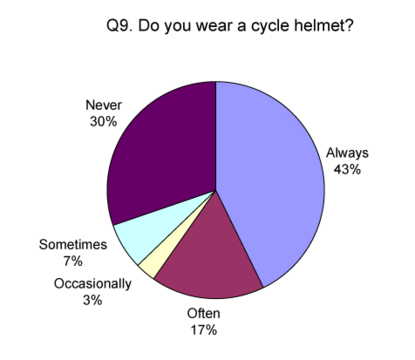 Respondents are split roughly one third female to two thirds male. Only 10% of respondents are under 30. The majority, 80%, are employed with the rest either retired or at study. 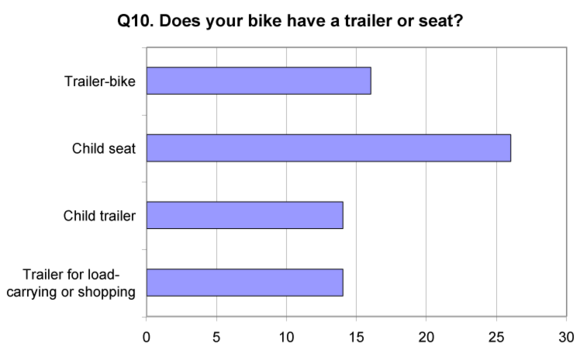 Simon says: respondents are Cycling Campaign Members, who are regular cyclists, mostly of utility bikes, covering around 20 miles per week, mostly male and usually wearing a helmet. They have access to a car and drive and walk regularly. They mostly live and work in Cambridge, are over 30 and employed. 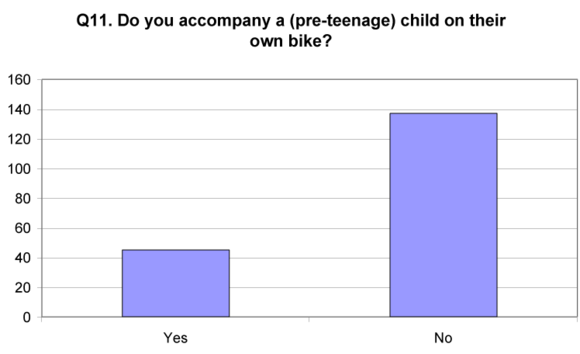 Section B: Your cycling choices in general 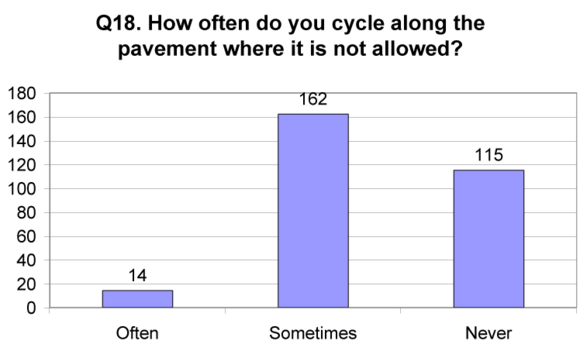 When cycle tracks or shared-use pavements are available 15% of respondents said they always use them, but 5% said that they always stay on the road. 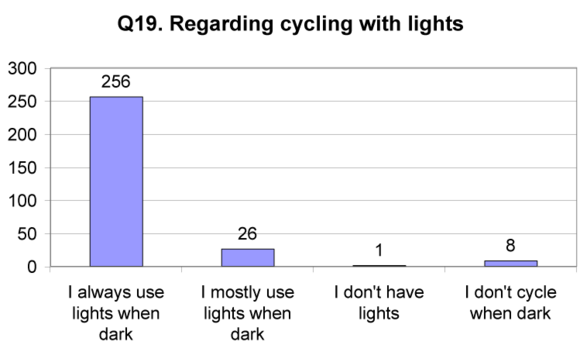 Over one third will never ride on the pavement where they know it is not allowed, but almost two-thirds admit to this activity. 85% always use cycle lights when dark.

Simon says: these responses indicate that members have a wide spectrum of abilities and confidence and that most are used to riding in darkness.

Section D: Cyclists and facilities in and around Cambridge 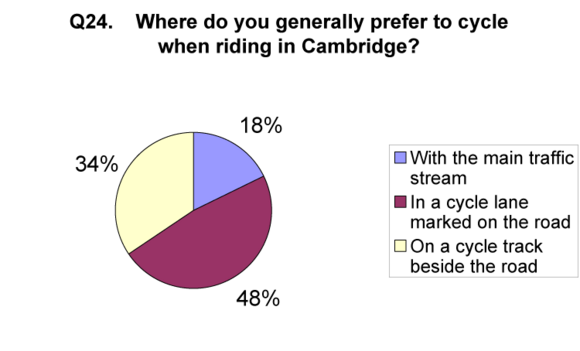 Where should cyclists be? Respondents prefer to ride in a cycle lane or cycle track rather than on the road, and prefer side streets with less traffic. For some they ride where they do because it’s faster, but more cite safety and ‘more pleasant’ as the main reasons. Other reasons typically included ‘less pollution’ and ‘quieter’. 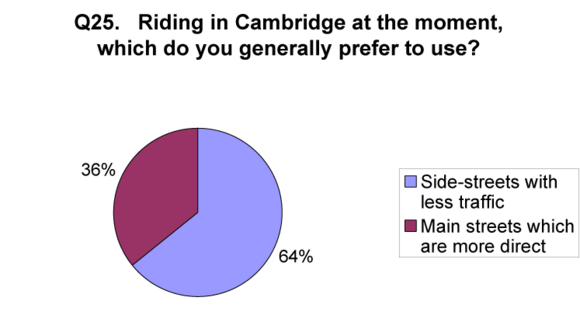 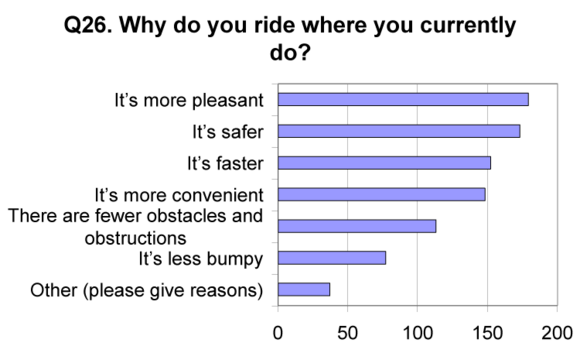 Over half feel acceptably safe when riding on the road, 15% don’t. 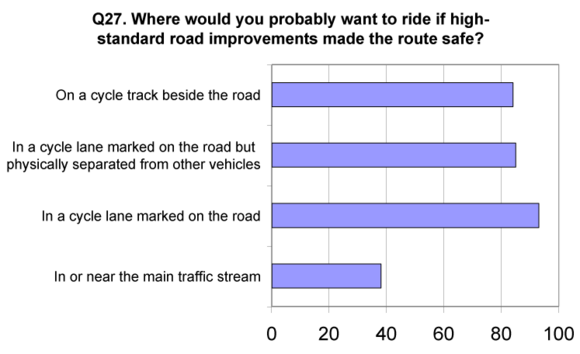 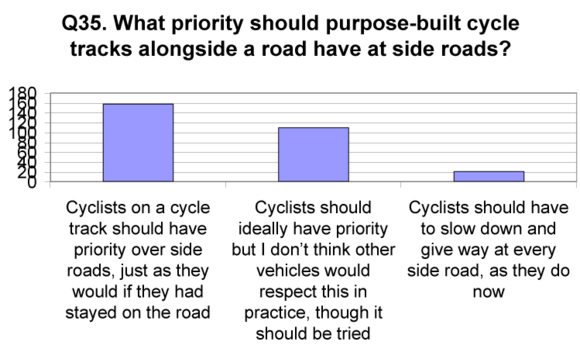 Bus lanes. A strong majority of respondents like bus lanes because they act as wide cycle lanes. They don’t want motorcycles to be allowed to use bus lanes.

In an open question about cyclists and facilities a predominant comment was about the poor level of cyclists’ behaviour. Many people felt that the poor standard of cycling brings cyclists and cycling into disrepute. There were also comments about poor driving and the attitudes of some pedestrians. There was a lot of criticism of poor quality facilities. 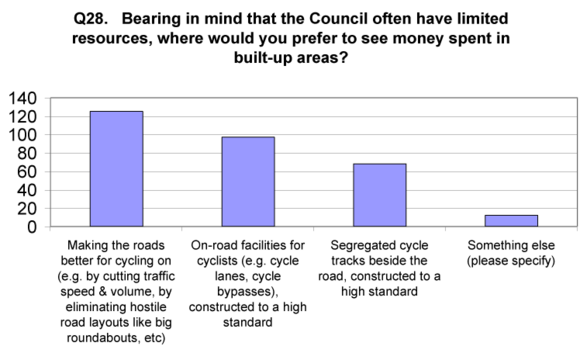 Simon says: Respondents are generally well aware of the range of places and routes where they can cycle. The majority prefer to cycle on the road and expect the conditions there to be made safer and more attractive. Relatively speaking, shared-use is considered to be a necessary evil compared to cycle tracks and wide cycle lanes. A majority of respondents will choose routes that are quieter and more pleasant. Bus lanes act like wide cycle lanes and should be protected from motor cycles. Judging by the number of comments about poor cycling there is a need for improved cycle training.

Sections C, E, F and G of the Survey will be covered in the next instalment.

A case in point: The cycling Lifestyle

It has to be understood that though this survey tells us quite a lot about us, the Cycling Campaign members, what it reveals is a picture of a self-selecting group. Though the results aren’t necessarily unrepresentative of Cambridge cyclists in general, one might argue that to have joined the Campaign represents greater concern and commitment.

That so many people have access to a car shows how much cycling is a choice, though of course that choice may be influenced by the inconvenience of using that car in Cambridge. The high number that have a trailer, carry children by bike or accompany them, shows how far that choice extends. In many cases it extends to a whole lifestyle, and perhaps goes some way to explaining why there so often seems to be a gulf of understanding between those who cycle and those who don’t.

One way of reading the fairly low mileage reported is that people’s lifestyle choices extend to selecting somewhere to live that is convenient for everyday journeys (though another is that cycling is only an exceptional activity). There is a way to do the shopping, to take the kids to school, that doesn’t involve a car. It is second nature to those who adopt this lifestyle, but involves a big apparent barrier to those who don’t.

A case in point: Coldhams Lane

Are narrow cycle lanes better than no lanes at all? We were very concerned by the 1.2 m cycle lanes installed on Coldhams Lane between the bridge and the Brooks Road roundabout a couple of years ago. Nowhere in Cambridge are cycle lanes installed at the recommended width, but these are well below the minimum. Though not the narrowest (this accolade over any significant distance is reserved for Mowbray Road at only 80 cm), these lanes pass alongside narrow parking, making cyclists vulnerable to thoughtlessly opened car doors.

On the other hand, the survey response shows that many of you find that narrow lanes can be useful. Since the fourth arm was added to the roundabout by the Beehive Centre around the same time the lanes were put in, queues on Coldhams Lane have become much worse. There can be a queue back to Brooks Road at almost any time of the working day. The new lanes allow cyclists to bypass that queue extremely easily, so that the ten-minute wait in the car is only a minute on the move on a bike. Similarly, outbound traffic jams in the evening simply don’t apply to cyclists.

In this lies one of the fundamental contradictions in cycling: safety versus convenience. Where should the balance lie? The survey responses probably bring us no closer to answering that question.