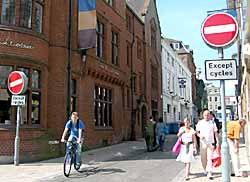 For one moment you had us all whooping for joy. David Earl’s article ‘No entry except for cyclists’ (Newsletter 61) includes a photo and comment which appear to announce that Queen Street, Norwich, is now two-way for cyclists. Unfortunately that naughty person with wishful thinking has been at it again, turning the ‘except cyclists’ signs through 180 degrees. They do in fact refer to the signs on the reverse side of the ‘no entry’ signs which indicate ‘no right turn’.

The one-way cycling idea was put in to mollify the pedestrians, in the form of one particularly voluble objector. Unfortunately it hasn’t been rescinded yet, so pragmatism has not yet prevailed, but we’re still working on it.

p.s. So Wookey is a real person. I always thought he was Lisa Woodburn’s dog!

Wishful thinking? The No Entry Except Cyclists signs in Histon have also now been removed, as we predicted in Newsletter 61.