The National Cycle Network was launched in 1995 following the award of £43.5 million of lottery funding through the Millennium Commission. There was a commitment to complete 2500 miles by the year 2000. In fact 5000 miles were completed, so the National Cycle Network was the only Millennium project to come in at budget and deliver twice what was asked. 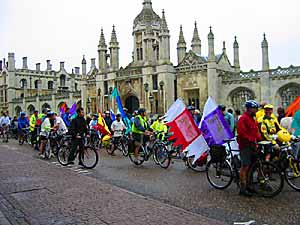 A couple of years ago Sustrans decided that they’d like to celebrate ten years of the National Cycle Network in Cambridge; in part this was because of the way that Cambridge is ‘Cycling City UK’, and in part because the first 5000 miles almost completely missed Cambridgeshire. 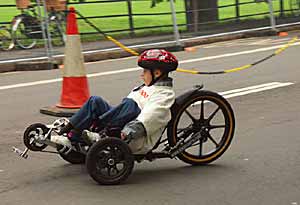 Two new national routes, 11 and 51, cross in the centre of Cambridge and run in together along the edge of the Cam over Jesus Green and Midsummer Common, and along Riverside, so the Celebrations were programmed for Jesus Green on the afternoon of 11 September with cyclists arriving from Oxford (on NCN51), Wells-next-the-Sea (NCN11), Ipswich (NCN51) and London (NCN11).

Just prior to this, at 13:00 the opening of the start of the 10000th mile took place on route 11 at Great Shelford. This opening was done by Sir John Sulston, the Nobel prize winner and former director of the Genome Campus at Hinxton. Some 100 cyclists, many having started from London, streamed through after the tape was cut on their way to Cambridge. Only the first short section has been completed, and a further celebration will be held when the route to Addenbrooke’s is opened with the end of the mile being where the route crosses Hobson’s Conduit via a new bridge.

The Celebrations had started earlier on Jesus Green following on from the ‘Bridge the Gap’ charity walk, with a cycle try-out show and children’s cycle races held on a closed Victoria Avenue, as well as stalls and exhibitions on the Green itself. 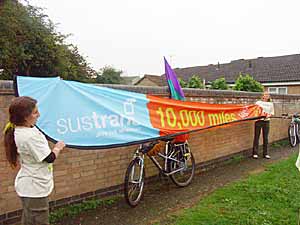 Unfortunately no one seemed ‘in charge’ on Jesus Green so when I and the hundreds of cyclists arrived on the Green, the Celebration Arch was still occupied by straggling walkers from the previous event and the large banner was not in place. A fault in communications or PA system also prevented many being aware of the photo being taken prior to the official welcome and speeches. 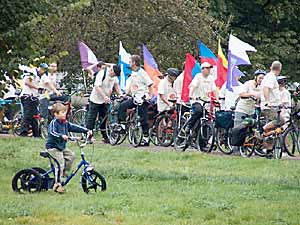 I was disappointed that so few local cyclists joined this special event, but another committee member was enthusiastic enough to suggest that this should be an annual event!

Following a rest day on the Monday, many of the long distance cyclists set off for the celebrations in Preston the following weekend.

As one involved in much of the run up to this event, I think I’ll join the ride to Preston next time as the less stressful option.