Cambridgeshire County Council have held a public consultation on their proposal to change the two crossings of Victoria Avenue (for pedestrians and cyclists travelling between Jesus Green and Midsummer Common) into toucan crossings which cyclists will be able to cycle across legally. Cambridge Cycling Campaign has, of course, welcomed this change.

However, the details of the design for the change were far from satisfactory for cyclists. We submitted a formal letter of objection asking, among other things, for: 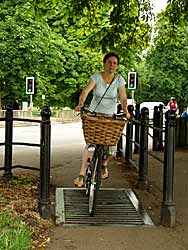 As a result of our letter and another from a local cyclist, an on-site meeting was held attended by two signals engineers from the County Council, the local city councillor (Colin Rosenstiel) and representatives of the Campaign. After much constructive discussion many of the issues were resolved or partially resolved but the conclusions on three matters were, in a revised design sent to us, still unsatisfactory from the Campaign’s point of view.

There is a pinch-point between the traffic island and the kerb at the northern crossing. The bus lane and traffic lane for vehicles going north will together be only 5.5 metres wide at this point. It is important to remember that if the guided bus scheme goes ahead, Victoria Avenue will be a major route for buses which are significantly wider than present Cambridge buses because of the non-retractable guide wheels protruding each side from the front axle.

It is unclear whether the detector loops will be installed.

The northern crossing would still be indirect and not straight-across. In the lead-up to the recent meeting of the joint county and city transport committee (AJC), councillors made clear their reluctance to accept a diverted northern crossing and asked the county officers to look again at the possibility of a straight alignment. Results are awaited.

The Campaign’s position is very clear. We ask for a straight-across crossing with detector loops to match the Fair Street crossing of Maid’s Causeway, the Gresham Road crossing of Gonville Place and the Burrell’s Walk crossing of Queen’s Road. To fail to provide such a crossing here would be a retrograde step.

Indirect crossings are unnecessary and have real disadvantages. They cause cyclists to lose momentum and they create conflicts with pedestrians. The argument used to justify the diversions is bizarre. Cyclists might otherwise, it is claimed, cause collisions by riding out in front of vehicles. This may, of course, occasionally happen, but it is no more likely to happen than at any of the ordinary road junctions which cyclists traverse on every journey.