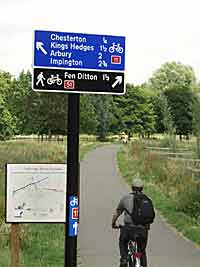 Many of the current city cycle network signs are out of date and in a poor state of repair. City and County Council officers and members of the Cambridge Cycling Campaign have got together to agree a new system of signage for the city’s comprehensive cycle network. This system will include blue signs for cross city routes, similar to the current signs, and black signs for both cyclists and pedestrians indicating useful local links. The old signs have been taken down and the new signs are going up beginning with signs for the National Cycle Network routes. All the new signs should be up by April 2006 and a new city cycle map will also be published to complement this new signage system.