This will be the last Campaign Newsletter before the National Cycle Network Celebrations, so although many details are yet to be fixed, we are outlining the latest position.

It is now ten years since Sustrans gained a Lottery Grant to develop the National Cycle Network, and ‘somewhere’ near Cambridge the ‘ten thousandth’ mile will be opened on Sunday 11 September 2005, hence the name 10 in 10 Cycling Celebration. 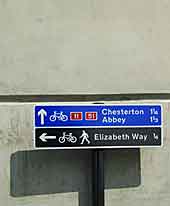 Sterling efforts are being made by many to ensure that major sections of four routes into Cambridge are complete and signposted by that date. NCN Routes ’11’ and ’51’ cross in Cambridge. As part of that effort a Sustrans work camp will be completing a section of route 11 south of Ely over a three week period from 6 August. Volunteers are welcome over any period, even a day. Further details of this are available from Sustrans (www.sustrans.org.uk or telephone 0845 113 0065).

The major events will be on the Sunday on Jesus Green. The Grand Opening will be combined with an afternoon of family fun, including a bike try-out show, BMX displays, children’s cycle races, a display and parade of vintage bikes, fairground rides and other activities for children. It will start at 12:00 and follow on from the Bridge the Gap charity walk in the morning. Victoria Avenue will be closed to motor traffic for the day.

Four major rides by Sustrans supporters will arrive, via the National Routes, on Jesus Green between 14:00 and 14:30 from Oxford, Wells-next-the-Sea, Ipswich, and London. An international contingent from the Continent will join the Ipswich group. If you’d like to join these rides over all their distance, please see details on the Sustrans web site.

We are asked if Campaign members will join these rides a few miles outside Cambridge for the final leg, We are suggesting that Girton, Waterbeach, Bottisham and Shelford would be good locations for us to join these longer distance rides. We would also like to have groups of cyclists coming en masse from other villages such as Fulbourn, Hardwick, and Histon to arrive on Jesus Green in advance of the main rides. If you would like to join one of these rides please let us know. We are particularly interested in those who could lead, and recruit others for such local rides from the villages.

Some of the National riders will be continuing, on the Tuesday, to ride on to Preston, where a Northern Celebration is being held the following week-end. We hope to give some of these dedicated cyclists, on their ‘rest day’, a conducted Good, Bad, and Ugly cycle ride around Cambridge. If you’d like to help with this, please contact us.

Interestingly, in the lead up to the events on Sunday 11 September, lots of activities are planned, by the Cambridge City Council and Cambridgeshire County Council, on the theme of travel for health, fitness and a cleaner environment as part of Exercise Your Choice week.

Finally on the Monday a national conference is being organised at Churchill College with the title Driven to Extinction: How transport policy can change the world.

This is organised by Sustrans and The Climate Group and is aimed at chief executives and equivalents from business and local authorities. At a price of over £200 per person, even for voluntary organisations and charities, we won’t be registering for places, but as an important local group hope that we may at least be allowed to exhibit some display boards, giving the positive aspects of cycling in Cambridge.

Stop Press Unfortunately it seems highly unlikely that the Shelford to Addenbrooke’s section of NCN Route 11 will be complete by 11 September. Contractors have been available to start work but other contractual issues have caused delays.