At its conference in June 2005, the British Medical Association, (‘the professional association for doctors’) adopted a policy to lobby the government to make it compulsory for all cyclists to wear helmets. Go to their website and you find that the BMA are demanding helmets for journeys to and from school, all school activities involving cycling, and paper-rounds. 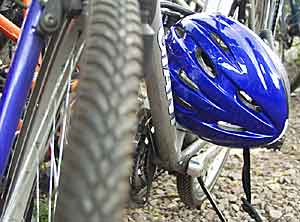 I believe that compulsory helmet legislation is the biggest threat to utility cycling in the UK.

Watching the progress of helmet compulsion legislation around the world it is not difficult to think that trying to stop it spreading is like King Canute commanding the waves to stop coming in. It’s not happened here, yet, but the BMA’s decision makes it much more likely to happen, and sooner rather than later. Unhelmeted cyclists have already lost their liberty – just try and find an image of them on any recent literature or website produced by government or local authority.

The compulsionists seem to have all the easy, emotive and ‘obvious’ arguments on their side. One proponent has talked of a child dying in her arms and claims a helmet would have saved their life. Although a helmet is only a 20mm layer of polystyrene the received wisdom of the general public seems to be that a helmet is bound to protect the rider from heavy traffic. Yet if you go on telly and say that helmets only protect up to 12mph the presenters make it seem like you want to hurt their children.

Police say compulsion would be enforceable

Anti-compulsionists are forced into a defensive position. Their arguments might be more scientific and accurate, but they’re delicately worded. ‘We’re pro-helmet, anti-compulsion’ is a complex position to explain. ‘If you wear a helmet you’re more likely to hit your head,’ or ‘helmets give a false sense of security, meaning you take more risks’ these arguments don’t wash with people. Arguments that articulate the reality of what it’s like to ride a bike in heavy traffic are lost on an audience more familiar with congestion and resentful of the freedom that cyclists appear to enjoy.

If there are arguments for retaining the liberty of the un-helmeted cyclists then the anti-compulsionists had better find them and give them greater currency. Enforcement is one. Police say compulsion would be enforceable. Imagine the mockery they would suffer if they took the opposite view. But look at their record locally on cycle lights and cycle theft: in reality these issues are never a priority for the police and so are largely ignored. The law will work against cyclists; in an injury collision an insurance company will have a stronger case for making an un-helmeted cyclist liable.

I got into cycle campaigning because I wanted cycling to be safer and more practical. I stare at drivers about to emerge from side roads until they make eye contact. I constantly look over my right shoulder. I am realistic about the protection a helmet can offer. It appears doctors would now label me as irresponsible for not wearing a helmet every time I ride my bike.

FOR: David Sinclair went against his BMA division’s advice in supporting the BMA’s motion:

‘I was thinking of dropping this, it’s a water melon, on the floor, to show how effective a helmet is but health and safety suggested that if the melon does splatter I’ve got problems… Cycling helmets, we all know, are effective cheap devices that save lives and cycling accidents. This is incontrovertible. The motion recognises we need to move along the road to compulsion some time in the future. This debate is about the rights and responsibilities of our society versus the rights and responsibilities of the cyclist in our society. It includes the loss of the cyclists’ freedom if he is forced to wear a helmet versus the real risk of death or permanent brain injury if he doesn’t. And the effect on friends and family and, indeed, doctors and healthcare workers who come face to face with the aftermath. I hope in the debate we do not get many nanny-state jibes from well-intentioned Lycra-clad freedom fighters. Remember, remember, the compulsory use of seatbelts was made law in 1981. As part of a caring profession you wouldn’t want that law repealed. I also hope we’re not told by jobbing career politicians of the surveys around the world showing accident reduction [sic] after helmets were introduced. Believe me, after the time this motion went in, I’ve been scouring the net and all the surveys are flawed in some way or another, mainly by confounding factors.’

‘Compared to the huge health benefits of cycling this motion may seem trivial, After all, there are relatively few deaths or injuries to cyclists. It may seem harmless, after all, how much harm can one centimetre of expanded polystyrene actually do? It may seem a useful protection, it’s been described as uncontroversial. None of these things is true. Cycling is the best buy in health. Cyclists have a death rate about 40 percent lower than non cyclists. Obese cyclists are rare. Helmet laws – wear a lid or get off your bike – powerfully discourage cycling, especially among teenagers. Every enforced helmet law has been followed by a steep drop, of about 30 percent, in cycling. Helmet laws are a grave threat to health. Danger? Well, it’s real. The hourly rate of injury is about the same for cycling as pedestrians and motorists. That’s about one serious injury per 3000 years of cycling. Serious injuries are not that common and the majority of them are due to motor vehicles. One centimetre of polystyrene won’t do you much good if you get hit by an HGV. No helmet law has shown any effect on the proportion of head injuries to cyclists. Helmets laws actually don’t work.’