This article was published in 1996, in Newsletter 6.

The reconstruction of the pedestrian crossing at Jesus Lock/Chesterton Road concentrates some serious concerns. Why is this work taking place? Who is asking for it? Who is paying for it? Does this site have a bad accident record? According to the Cambridge Evening News, it is for the convenience of car drivers: “Motorists asked for a new crossing because they said cyclists often rode straight from the bridge on to the busy road, and pedestrians had stepped out into the traffic” (10 April).

The obvious – and infinitely cheaper – remedy to such outrageous behaviour, as discussed with everyone including the roadworks crew doing the job, would be to erect a short kerbside railing opposite the bridge, as found outside many a school gate. Nevertheless, at the behest of “drivers’ complaints”, creating a Pelican “will be a significant road safety step forward”, according to Evelyn Knowles, Councillor for West Chesterton and apparent instigator of the project. Will it? The site is not known to experience an unusual accident record; certainly not enough to satisfy the County’s criteria for its miserly annual crossings allocation, of which budget this is not part. Further, in accordance with current practice, the carriageway has been reduced to a mere six metres. A bus is nearly 3 metre wide; where does this leave the cyclists on Chesterton Road? 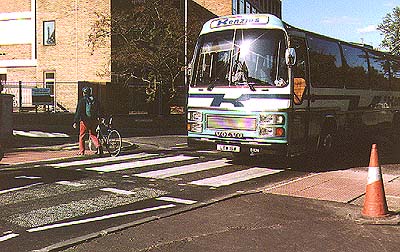 As part of a major cycle commuter route into town, as well as a major pedestrian access to Jesus Green and the DSS office adjacent, this crossing has served quite well for a long as most people can remember. An obvious improvement would involve stopping off the end of Carlysle Road to motor vehicles and expanding both the crossing and footbridge to a cycle through-route, as the Cycling Campaign, had it been consulted, would have told whoever is responsible. (It is almost certain that no pedestrians were consulted either).

For pedestrians, Zebra crossings are excellent things. They accord them (and cyclists, walking) automatic priority to cross the road in safety, something that Coun. Knowles appears, in the press report, not to understand. If there is indeed a problem it involves the illegal behaviour of motorists heedless of Belisha Beacons flouting the Highway Code. This is what needs to be controlled, not the pedestrians, whose freedom and mobility are unacceptably compromised by a perverted concept of road safety.

‘Pelican’ is said to be a convoluted acronym including ‘pedestrian controlled’. The opposite is true. It is a device to control pedestrians. Zebras give rights and mobility; Pelicans take them away. They make people wait for cars. Pelicans are Bad Things also for drivers (who are obliged to stop when there’s no-one on the crossing) and for cyclists (for the same reason but more so, with the energy-loss incurred in unnecessary stopping and re- starting). Perhaps worst of all, the associated carriageway reduction is done for no alleged ‘safety’ reasons, but to reduce the period of the traffic ‘stop’ phase; in other words, an additional hazard for cyclists is deliberately engineered in order to minimise the inconvenience to motorists. 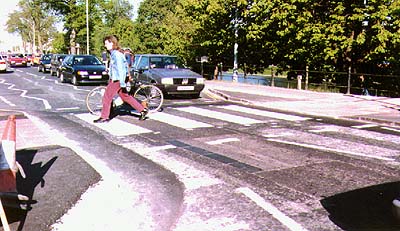 The only real justification for ‘pelecanisation’ is in situations (e.g. at New Square) where the crossflow of people is so constant that motor traffic would otherwise be halted permanently, and here it would be both logical and equitable to fix the ‘normal’ phase in favour of the crossers – a notion that has certainly never occurred to the highways authority.

When the County Council declares is ‘cannot afford’ to institute more than seven pedestrian crossings per year, it refers to Pelicans, which cost roughly five times as much as Zebras. Thus village high streets, where the young and old are terrorised from visiting the Post Office across the road, languish year after year with no crossing at all, because official wisdom has it that Zebras are ‘dangerous’, meaning that ‘the traffic is too fast’, or that motorists cannot be trusted to drive lawfully. There operates both a powerful aversion to deal with the source of road danger and a serious shortage of respect for the rights of vulnerable road users.

Some of the issues concerning Pelicans, particularly the way they operate in favour of motor traffic, were recently presented by the CCC to the County Transport Dept, whose response was not 100% helpful. As for Jesus Lock, the new crossing is not yet a Pelican, though provision has been made for such. Perhaps we should now press either for retaining the Zebra, or for a fully fledged bird of the Toucan variety, which the case seems clearly to demand. A Pelican is the worst of all options.