What a fantastic turn out for the “Grand Cycle Ride: Safe Streets For Cycling”. Our official counter counted 208 people pedalling on the ride. It was especially exciting to see so many children: most of whom would never be allowed to ride on the road alone. 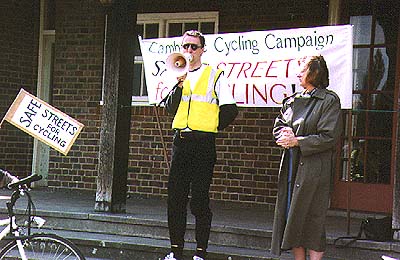 As we assembled on Parker’s Piece it became clear that we were going to reach around that figure, and even the police must have noticed and came out of the Police Station to discuss where they should stop the traffic for us. In our earlier liaison with them it appears they didn’t believe we’d achieve quite such a good turn out. Anne Campbell arrived on her bicycle (she couldn’t join us on the ride) and wished us well in our campaigning and the ride that day. 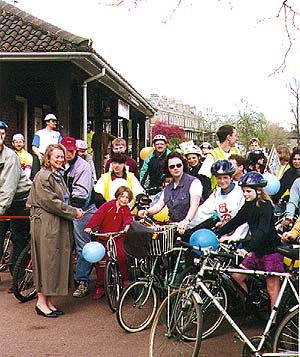 After a Cambridge Evening News “photo opportunity”, when she cut a red ribbon, we were off! As we expected, despite Police assistance at a couple of junctions, the ride became quite disjointed and those at the front stopped at pre-arranged points so that everyone could catch up. It was at those times when some of us (especially those wearing a Campaign T-shirt) wished it had been a little warmer.

Despite a rather unpleasant incident in Trinity Street with an irate motorists, after an hour or more on the road we ended up in the Market Square. There Cllr. Chris Bradford addressed the colourful crowd and Lisa then thanked everyone for coming. The stall was also there and we gave out many membership leaflets and sold several T-shirts. 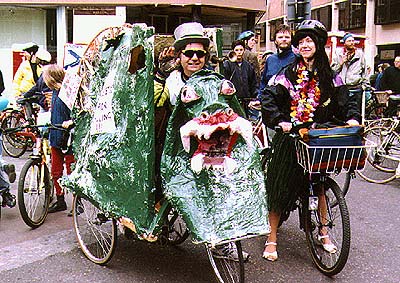 The afternoon had been great fun and very empowering to see so many cyclists together demonstrating for streets safe to cycle along. While the press coverage (including a pre-event full-page in the Cambridge Evening News) of the event helped raise the Campaign’s profile and brought the dangers facing cyclists every day on our streets to a wide audience.