Speed kills. 90% of pedestrians hit by a vehicle at 40mph die, 20% at 30mph and only 2.5% at 20mph (figures from Which? Magazine, March 2005, page 20). For cyclists hit by vehicles the differential effect of vehicle speed is likely to be similarly significant.

What do we know about speeding in this country? In what follows I draw on data assembled by Claire Corbett in chapter six of her impressive and scholarly book Car Crime (Willan, 2003). It is well established that speed is a main contributory factor in around a third of fatal road traffic crashes. In the year 2000 in England and Wales around 1100 avoidable deaths and more than 100,000 casualties resulted from exceeding limits and inappropriate speed. Government figures compiled from a wide range of sites show that on urban roads with a 40mph limit the average speed was 37mph with 25% of motorists exceeding 40mph. Where the speed limit was 30mph, the average speed was 32mph with 66% exceeding 30mph. 38% of buses exceeded the 30mph limit. Higher speeds are associated with both more serious collisions and with more frequent collisions. Reducing average speeds by just 1mph cuts average collision frequency by around 5%- more on slower, urban roads. There is nothing unexpected about the fact that speeding is dangerous. What is, for me, unexpected is that such small reductions in average speeds bring about such disproportionate benefits.

Since its foundation the Cycling Campaign has always campaigned for on-road provision for cyclists in Cambridge in preference to off-road provision. There are many reasons for this policy which are set out in the Campaign’s policy statements and which I shall not go into here. For the present discussion one implication is clear. Motor vehicle road speed reductions matter. In a city in which 25%-28% of people cycle to work and in which pedestrian density is also very high, it is reasonable to expect motorists to reduce their speed to a greater extent than might be justifiable elsewhere.

There are four main methods for securing reductions:

In Cambridge current speed limits seem arbitrary, irrational and in great need of modernisation and systematisation. The Campaign is seeking major changes. In most of the narrow City Centre streets the limit is 30mph, but 10mph for those few vehicles permitted access to the City Centre between 10am and 4pm. In Bridge Street, Emmanuel Road and Silver Street a 20mph limit is used to protect short lengths of road where there are rising bollards. We favour a comprehensive 20mph limit for all areas within the inner ring road except for the City Centre between 10am and 4pm when vehicles permitted to enter should still be restricted to the tougher 10mph requirement. 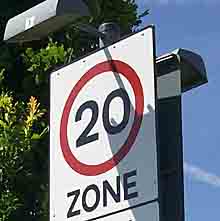 The CCN (Federation of Cycle Campaign Groups) in their manifesto ask for a default 20mph speed limit for most urban and residential streets. In Scotland, Edinburgh is pioneering a city-wide 20mph zone. Cambridge, with a much higher proportion of cyclists and of on-road pedestrians in the city centre, is remarkably slow in changing. The government’s draft local transport notes state that reductions in pedestrian and cyclist accidents of 63% and 29% respectively have been measured where 20mph zones have been introduced (paragraph 4.3.7). We know that imposing a more rigorous speed limit does not always reduce the collision rate in every road affected, but because of the results achieved in other cities and of the fact that reducing average speeds by even 1mph has such a dramatic effect we should be more willing to experiment and to innovate.

We are also campaigning for a reduction of the speed limit in Long Road from 40mph to 30mph to coincide with the development of new housing and new cycleways in the area. The current 40mph limit is, in any case, inconsistent with the 30mph limits along the roads at both ends – Trumpington Road at one end and Hills Road and Babraham Road at the other.

Road design changes, especially traffic calming measures, have often been successful in reducing traffic speeds both on their own and when accompanied by reduced speed limits. Corbett reports reductions of 10mph for some traffic-calmed schemes. In general such schemes tend not to be favoured by local authorities on bus routes or through roads, though in Cambridge we have a number of relatively successful instances of both – for example, in Bridge Street, Chesterton High Street, Radegund Road and at the junction of Drummer Street and Emmanuel Road. Our experience as cyclists of traffic calming in Cambridge has been very mixed. A surprising number of schemes, even recent ones, take little or no account of the needs of cyclists and involve build-outs or other inappropriate measures which force cyclists out into the path of other faster vehicles. We have reason to be suspicious of every new traffic-calming scheme, especially as we are often only able to see the detailed designs at the very last minute when it is very difficult to get necessary changes made.

In Cambridge as elsewhere speed cameras, though installed only at places with high accident rates, have been demonstrated to reduce speed and accident rates at these specific locations. If the government were to act more bravely and to change its policy so that such cameras could be installed much more widely, there is little doubt that greater reductions in both speed and accident figures could be achieved than are obtainable by other measures at comparable cost. The benefits for pedestrians and cyclists would be substantial. The means are available. Only the political will is lacking.