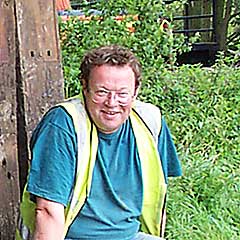 Robert Gray, who sadly died in November, was a committed cyclist, an early member of the Cycling Campaign and a keen supporter of Sustrans. He was a strong believer in the benefits of cycling and rarely travelled by car. He would have been pleased by the number of bikes parked outside for his funeral at a packed Christ Church.

Robert enjoyed practical work and Sustrans work camps became a major part of his life. At these work camps, he would meet up with other regular volunteers and new volunteers, and help to build paths and cycling facilities across the country. For him it was a holiday, in an attractive place, doing something he was passionate about and in good company. He would always arrive at the camps by bike and train, at times with a mini-fridge full of beer in his trailer!

Robert also volunteered his services to Sustrans in the late 1990s looking at options for the National Cycle Network around Cambridge and, as part of this, he produced a very detailed study, with photographs of lots of options in relation to the route between St Ives and Cambridge. Knowing how thorough and committed Robert was, I was therefore particularly pleased when, at the opening of the Jubilee Cycle Route, he agreed to become a volunteer Ranger for the route. He took some persuading, because he was worried that he might not be able to commit enough time, but said that he would try and ride the route once a week! In reality, this is a big commitment and is way above what Sustrans would expect or hope from Rangers, especially given that Robert’s regular ride included litter picking, checking on signs and cutting back vegetation. If things have got worse recently this is because Robert has not been there.

Whilst Robert’s death is a great loss, I am sure that he would also have wanted us to look to the future, and he was always keen to encourage others to volunteer. Sustrans is certainly looking for more volunteers in the Cambridge area:

Robert was particularly looking forward to the Ely workcamp on his ‘home patch’ and, whilst his absence is already noticeable on the Jubilee Route, his company will be greatly missed at the workcamp. It would be a fitting tribute to Robert if this workcamp turned out to be one of the best ever, giving a real boost for cycling in the area.