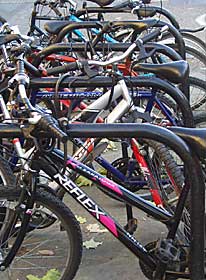 Whilst perusing a new book (A New Deal for Transport? The UK’s struggle with the sustainable transport agenda by Iain Docherty, University of Glasgow and Jon Shaw, University of Aberdeen, published by Blackwells) I found the following table.

So what is new? That is what is interesting. It is not new, as the table quoted originally came from a book written over twenty years ago (Bicycle planning, policy and practise, Mike Hudson, Architectural Press 1982). Don’t you find it worrying how little progress we’ve made in over 20 years?

It is a cheap way of providing mobility
Cost effectiveness is an important criterion for determining the priorities for investment. Money spent on removing the constraints on cycling can significantly increase the availability of transport for a large section of the community. The provision of routes for bicycles gives people ‘freeways’ for the price of footpaths.
It makes efficient use of space
In congested urban areas, space is a valuable resource. Bicycles take up little space when moving; the capacity of a road is increased approximately ten times if bicycles are used instead of cars. Furthermore, bicycle parking does not rank in the same class as car parking; between 10-15 bikes can be parked in one car-parking space
It contributes to energy conservation
Energy conservation is now a priority in most countries. (A cyclist can travel about 2,500 km on the energy equivalent of five litres of petrol.)
It keeps people fit and healthy
Regular cycling reduces body weight, reduces heart disease, lessens tension, improves sleep and therefore reduces the cost of health services. It has also been shown to increase people’s efficiency at work.
It is an equitable means of transport
More people can afford the running costs of a bicycle than any other means of transport, and the capital cost is less than a week’s wages in most developed countries. The bicycle is a simple piece of machinery to understand and maintain, and thus gives people greater control over their lives.
It can cut death and injury on the roads
The annual toll of deaths and injuries to cyclists is appalling. Many are killed and injured through no fault of their own. Cheap and well tried methods can be used to save lives.
It is a quick means of transport
Door-to-door travel times for urban journeys up to between 2.6 and 4 miles (the vast majority of urban journeys) can be quicker by bicycle than any other means of transport.
It is a reliable means of transport
Bicycles are less likely to break down than other means of transport and are unhindered by traffic jams.
It provides mobility to practically everyone
Many of the old, the young and people from other minority groups who will never be able to drive cars can ride bicycles.
It is a benign form of transport
The bicycle is noiseless, pollution free and does not significantly encroach on other peoples lives.