In July, the Cambridge Area Joint Committee (AJC) (councillors from both Cambridge City and Cambridgeshire County Council) approved an experimental scheme to allow two-way cycling in St John’s and Trinity Streets between 10 am and 4 pm on Mondays to Saturdays when most motor vehicles are banned. These streets are currently open to cyclists all day, every day, but in the southbound direction only (see the article in Newsletter 55). However, in an exceptional move, and on the advice of council officers who have continually opposed the scheme, the County Council’s Cabinet (a committee of executive councillors which has the power to override the AJC) has intervened to prevent the experiment going ahead in its present form. Although the Cabinet appears to be generally supportive of the principle of two-way cycling, it decided that the proposed scheme was unsuitable and would have put the council at risk of legal challenge. The scheme has now been sent back to AJC with a request to come back with an improved scheme with better arrangements for contraflow cycling along the narrower parts of the street. See article in this newsletter. 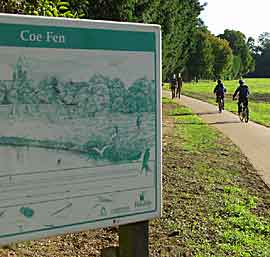 An upgraded traffic-free cycle route has been opened between Mill Lane and the Trumpington Road-Brooklands Avenue junction via Coe Fen, on the southern side of the City Centre. This replaces a narrow, unsurfaced path that, although used by cyclists for generations, was bumpy, muddy and difficult to use because of the lack of a crossing where the route crosses the Fen Causeway. The new path has a hard, if slightly uneven, surface and there is a push-button-operated toucan crossing at Fen Causeway. In recognition of the environmental sensitivity of this area, the path is still quite narrow (narrower than the Jubilee cycle route across Ditton Meadows, for example) and is unlit. This will form the first section of a National Cycle Network route towards the south of Cambridge. Although the route is not perfect, it is a big improvement on the previous path.

This is a charming route through one of the areas which make Cambridge special and offers a pleasant if slower and longer alternative to the direct route along Trumpington Road and Trumpington Street. For some cycle journeys it offers a way to avoid the mini-roundabouts at the Fen Causeway-Lensfield Road junction. However, it will never remove the need for cyclists to use that junction, and must not be used as an excuse for failing to improve the safety of Cambridge’s third-worst accident black spot.

A completely new cycle path is nearing completion alongside the A1301 between Sawston and Hinxton. The new path, which is not yet officially open, starts just north of the big A505 roundabout and runs south for about a mile, to the turning to Hinxton. The path itself is smooth and wide, though its division into cycle and pedestrian parts means the part on which cyclists can legally ride is too narrow to allow two cyclists to pass comfortably.

It is not clear why the planners decided to restrict cyclists to one side of the path when most other cycle paths along country roads around Cambridge allow cyclists to use their whole width. The new route suffers the usual drawbacks of the need to give way at side roads, especially at the A505 roundabout which remains a major obstacle. Indeed ‘cyclists dismount’ signs are used incorrectly in many places when the correct sign is, in fact, ‘give way’.

Nevertheless, it offers a useful link from Sawston to Hinxton and to the lovely cycling country beyond, and is to be welcomed. The whole route is being paid for by the Wellcome Trust as a condition for being given consent to extend the Genome Campus at Hinxton. Perhaps a better way of encouraging people to get to the Campus by bike would have been to build it closer to where most of them actually live.