You’ve heard about the Bermuda Triangle. So, now hear about my own two-wheeled version, the Robin Hood Cross.

There’s something about the cross roads by the Robin Hood and Little John pub at Cherry Hinton that’s fateful. Any bike related incident, more often than not, it’s there that it happens.

I’ve lost count of the number of punctures I’ve had on one or other of the roads approaching this junction. Naturally, these nearly always happen in wet weather, though that’s often the way with punctures.

But it’s more than just punctures. Things fall off occasionally if you put them on the carrier – a silent loss happened just down the road, when a packet of labels for our newsletters slipped off the rack, for instance. But how is it possible that my mobile phone inside my pannier could have worked its way out under the flap, simultaneously with there being a car overtaking so close that I couldn’t avoid hitting the series of potholes on the city side of the traffic lights that have been there for years and years – so long I avoid them without thinking.

So there’s a clatter behind me, and I think nothing of it. Until that is I can’t find my phone. Little John must have Mexican connections, as a fifteen-minute call there appeared on my bill before I could stop the account. I always put my phone in the zip pocket now.

The bike itself has suffered numerous breakdowns, but one of the more serious was when the rear cog completely disintegrated. Naturally, this happened in one of the heaviest rainstorms of the year. And naturally also it happened exactly in the middle of the Robin Hood junction. One second I was pedalling, the next my legs were going round doing nothing with traffic coming at me from two directions.

How fortunate that the bus route home crosses my cycling route at this junction – had it not been that the last vehicle to cross when waiting for the lights had been the bus home.

There’s not much about this junction that makes it more hazardous than any other. Yet it has to be here, of course, where I have had my closest near miss. A car turned right across my path and I couldn’t stop in time. The driver had been blinded by the low sun behind me and had made the typical driver assumption ‘if I can’t see, it must be clear’.

But you know something is spooky about this place when you see the ghastly purple and green lighting the owners have installed to illuminate the pub. Robin Hood’s colours maybe, but thoroughly tasteless nevertheless.

I haven’t much choice but to use the junction regularly. But I bite my lip each time I go near it now, this Bermuda Triangle of my very own. 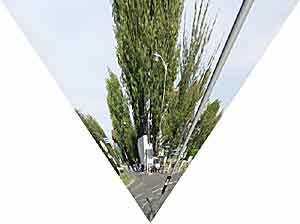