Was it deliberate to have the cover picture at the top of the newsletter be a bunch of cyclists very obviously cycling past a no entry sign into Trinity Street? It doesn’t do cyclists’ reputations any favours! 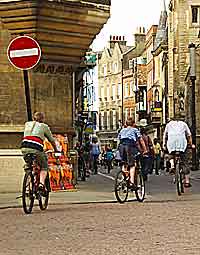 David Earl replies: We had a couple of comments along these lines from readers, so I thought it might be useful to explain. One of the main motivations for councillors promoting change in Trinity Street is that there is clearly a demand for it. Though illegal, council counts show that there are nearly as many cyclists going the wrong way down Trinity Street as there are the right way – around 400 during the 10-4 pedestrian zone period, and largely without problems. On this occasion I thought putting our head in the sand to pretend it wasn’t happening would be counterproductive.

I think that the Fen Causeway toucan crossing at Coe Fen is a big improvement to cycle (and pedestrian) safety and convenience. How do I officially ask the Cambridge Cycling Campaign to send a note of appreciation to the appropriate authorities?

Write to us, of course. The authorities read this Newsletter.

The article in your last issue concerning the recent changes in Kings Hedges Road gave a somewhat inaccurate impression. The Kings Hedges Road project is an accident reduction scheme, not a cycleway scheme. What we have done is to narrow motor traffic lanes in order to reduce traffic speeds, and we dedicated as far as possible the surplus road space to cyclists.

Some road space has had to be retained for residents’ parking, but only on one side of the road. However, the parking bays are largely empty during the working day, and effectively form a continuous 1.8 m wide cycleway when used with the side road cycle priority lanes.

Furthermore, in order to help all categories of cyclists as far as possible, a number of features, such as the cycle slips and the side road cycle priority lanes, have been provided even though they have no direct effect on speed reduction.

The impression given by the article was that this project is a cycleway scheme which has been skimped. It is, in fact, an accident reduction scheme, a by-product of which has been the maximum possible benefit for cyclists within the constraints of the primary objective and the available finance.