Cutter Ferry (or Pye’s) bridge has been closed since November when it failed a safety inspection. It is now likely to be rebuilt in three stages, the first being the replacement of the main span.

Two members of the Cycling Campaign committee met Gareth Guest, one of Cambridgeshire County Council’s bridge engineers, at this bridge in mid-July to look at the draft plans.

Although we are pleased that the replacement bridge is to be designed to allow cycling, we are concerned that it may be significantly narrower than an ideal width. In fact only the minimum required (2.75 m) for a new shared-use bridge is currently being costed. By comparison the Fort St George bridge is 3.0 m wide and the Green Dragon bridge, where cycling is not at present permitted, is 2.4 m. The segregated cycle bridge beside the station is 4.2 m wide. 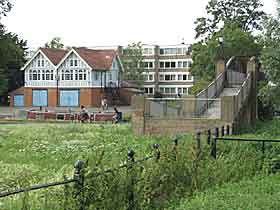 There are problems over the approach ramps, but as the main support abutments are considered insufficient to carry the new span and will also need to be replaced, we’ve asked the County Council to give some estimates of the extra cost of, say a 3.0 m wide span. If the County can be persuaded that the extra width is needed, it could mean some other cycle works may be delayed.

Work on the approaches will follow later, but on the north side college lands restrict the space and it appears that the Colleges are far from co-operative over access and additional space. In addition any work will require Environment Agency approval as it could obstruct flood flows of the river.

On the south side there are opportunities to improve the approaches for both cyclists and pedestrians, and any developments that take place on the old Cambridge Regional College site off Newmarket Road should provide ‘Section 106’ funds that could be added to the required pot.

In April 2003, in a 12 hour period, this bridge carried 1077 pedestrians and 947 cyclists. The figure for cyclists is no doubt suppressed by the difficult access. Given the high flows of pedestrians and cyclists, along with the frequent ‘gongoozlers’ watching rowers, surely a greater width than the minimum can be justified?