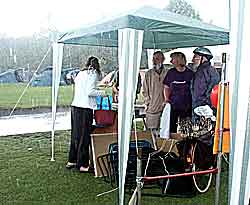 Another year of mostly sun for Bike Week, though a downpour at the end of the Bike Fair on the first Saturday gave us a chance for a huddle and chat under our gazebos.

The Fair was productive and informative. Our ‘doctors’ attended a good number of bikes, one or two of which were recommended for hospital treatment! Townsends brought along their Light Blue bikes for us to try out – I certainly much enjoyed doing this. Many people had fun trying the various Dutch Bikes, the one with a big box in front for passengers being particularly popular. A police stall gave out cycle security advice and, at the Fair and during the week as a whole, over 100 bicycles were security coded.

Once again the team of adult cycle trainers from Cambridgeshire Travel for Work Partnership trained 19 cyclists during weekday lunch hours. Seven of the eight complete beginners could cycle at the end of the session; of the remainder, nine trainees were beginners and two fairly experienced. A few of these trainees are expected to book further sessions at £12 per hour. Indeed, Huntingdonshire District Council has agreed to pay for further staff training sessions as a result of Bike2Work Week. This was an opportunity for the four new instructors to receive shadow training, and all new instructors carried out a minimum of two sessions each. Once again H Drakes offered their hire cycles free of charge, which made the training of beginners possible.

Our breakfast event was rather different from previous years. The five large city supermarkets provided over 180 cyclists with a splendid free breakfast. Most knew about the treat in store (pun not intentional!) and had made a special stop on the way to work, but a number of cyclists had an unexpected surprise when they were handed a sticker entitling them to a free meal. We must extend our grateful thanks to Tesco (Newmarket Road, Fulbourn and Milton), to Waitrose and to Sainsbury’s for their co-operation and for putting on such a warming and much appreciated breakfast.

We went on a fascinating bike ride on each of the Sundays of Bike Week. Both were very well attended with between 25 and 35 riders, ranging from the babe in the child seat to the pensioner. The first ride was led by Simon Nuttall who gave us a host of interesting snippets about places we often pass but don’t really know about – Stourbridge Common, the Abbey at Abbey Road and the Leper Chapel on Newmarket Road which we were able to go inside to learn its history. We cycled over the new Jane Coston bridge to Milton Country Park. There we stopped for a sociable picnic before returning to Parker’s Piece via Chesterton Tower and the Fort St George bridge with its new cycle provision and cattle grid.

On our second ride we visited five of Cambridge’s nature reserves. Ellis Selway (Community Reserves Officer) led us first to Logan’s Meadow by the river opposite Riverside – a possible site for otters and kingfishers. We continued to Bramblefields, not far from Chesterton sidings, then across Coldham’s Common to Barnwell West (along the edge of the Common and Barnwell Road) and Barnwell East (between Barnwell Road and the airport). Here we ate our picnic lunch, looked at bee orchids and helped to pull up the invasive michaelmas daisies that dominate a large area. We ended our tour in Paradise, Newnham. Our thanks must go to Ellis Selway for this well-thought-out and informative tour. I think everyone on the ride found at least one lovely place they had no idea existed. 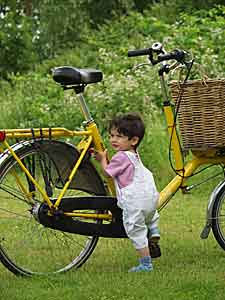 Of course, our thanks must also go to many others. First and foremost to Lindsey Rushmore (Cambridgeshire Travel for Work Partnership) and Clare Rankin (City Council Walking and Cycling Officer) who took on the major work of organising the cycle training, the breakfast, the publicity, the printing and much more. We must thank all our volunteers who gave their support and helped the events run smoothly, and Simon for his informative and enjoyable cycle ride to Milton. Thanks also go to Townsends, dutchbike.co.uk and airnimal.com for bringing their bikes to the Fair, to Drakes for the use of their bikes for training and to Cambridgeshire Constabulary. We really do much appreciate all this help, and particularly the interest and support from the County and City Councils.