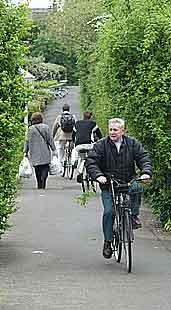 Cyclists using this pedestrian and cycle route from York Street to Coldham’s Lane though the Beehive Centre will discover soon that, despite being marked on the County Council’s cycle route map, it isn’t a cycle route any more. In a recent letter to the Campaign, the consultants who manage the site told us that this path and the nearby path from Sleaford Street are ‘pedestrian walkways’ along which ‘cyclists should not be bicycling’ and new ‘cyclists dismount’ signs are to be installed to specify this. This startling news shows just how little the management of this site – who write from an address in central London – know about it. When the current supermarket was proposed, the Campaign met a representative of the developer and received an assurance that these long-standing cycle routes would remain as cycle routes. We will be doing all we can to get these cycle routes reopened.