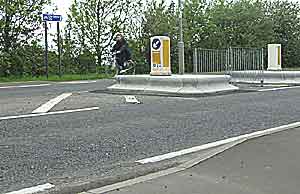 An island on Airport Way which was originally installed to help cyclists from Teversham join the cycle track towards Cambridge via Newmarket Road has been reconstructed so that it is now almost useless. It now has metal chicane barriers, which makes it really hard to negotiate by bike, makes it impossible to pass another cyclist crossing, and limits the number crossing to one at a time. Presumably someone thought cyclists might ride straight across without stopping for cars, but did not realise that it is now so hard to use that people will cross on the outside of the island rather than through the barriers, especially as it makes more sense to cross at an angle here and the flush kerbs are in the right place to allow this.