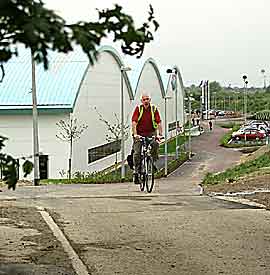 The Tins path between Mill Road and Cherry Hinton has finally been opened on its new route. The new route, which takes cyclists through the new development site off Coldham’s Lane, was opened in April. As a result, the central section of The Tins is now much better than it was a few years ago. The railway bridge and the sections on either side remain inadequate and in need of improvement.