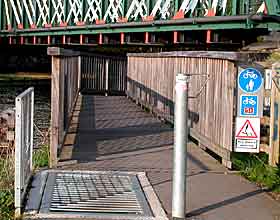 This is the wooden jetty where the Jubilee Cycleway passes under the railway line between Stourbridge Common and Ditton Meadows. We’ve received several reports of cyclists slipping over in wet weather and hurting themselves. We reported this to the County Council and also erected these warning signs. The County Council quickly agreed there was a problem and have promised to install an anti-slip surface on the corners. They also removed our unofficial signs and told us off us for putting them up. We asked the council to install their own temporary warning signs until resurfacing is complete but they refused.