In recent years, various pinch-points on cycle routes across commons have been replaced by miniature cattle grids. We have always strongly welcomed these developments and, indeed, one of our first ever ‘Golden Bell’ awards went to Cambridge City Council engineers for the original mini cattle grids on Midsummer Common. These are a particularly cost-effective way of increasing convenience for those cycling around Cambridge.

However, as long ago as April 2000 (Newsletter 29) we pointed out that, when cycling across a cattle grid, it’s important to travel in a straight line, at right angles to the bars:

Cattle grids are much better than pinch stiles, but take care to cross them at right angles, and don’t brake or turn on them – they are very slippery when wet. 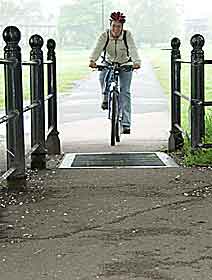 In recent months we have heard from a couple of cyclists who have come off riding their bikes in wet weather at an angle on cattle grids. One of these broke his arm in two places, and the other needed more than £100 to repair his bicycle.

As a result, in a welcome move, the City Council is now investigating ways to increase the friction between bike wheels and cattle grids.

We would like to get a better idea of the scale and locations of the problem, so in the (we hope, rare) event that you have slipped on a particular Cambridge cattle grid, please do let us know, so that we can pass the information on to the City Council.