Last August (Newsletter 49) we welcomed completion of the County Council’s casualty reduction measures on Mitcham’s Corner. Since then a number of people have asked us, ‘But where can I cycle, and how should I use it?’ Here’s our attempt at answering those questions. It’s a relatively complicated scheme with a number of components. I’ll look at the individual parts first and then go on to look at ways of stringing together the new links.

If you cycle around the junction, you are most likely to notice that the scheme has introduced three sets of traffic signals to control merging lanes of traffic. These traffic signals form pairs so that signals T1 and T2 (see map – you can decide for yourself whether T stands for ‘traffic signal’ or ‘Toucan crossing’) alternate between allowing traffic from Victoria Avenue on to the junction, and then west-bound traffic from Chesterton Road. Similarly, T6 and T7 alternate, as do T8 and T9.

The traffic signals on the exits from the junction (T3, T7 and T10) are actually pedestrian/cycle crossings, as is T4, and these will only stop traffic after someone pushes a button asking to cross.

Most of these signals have cycle approach lanes and advanced stop lines. These can help you to get to the front of the queue of traffic, or to get to a traffic island joining a pavement cycleway. Your choice will depend on your route through the junction.

There are also a few lengths of red on-road cycle lane. Where some of these lengths run alongside parking lay-bys there are narrow hatched buffer areas to protect cyclists from car doors opening.

However, the red cycle lanes will not always be useful to you and, for some manoeuvres, they should expressly be avoided. For example, if you are turning right and there is only a cycle lane on the far left (as in front of Staples), the cycle lane will put you in the wrong position on the road: you should be in the right-hand lane.

The scheme has converted some stretches of pavement to shared-use making it legal to cycle on these pavement sections. This provides a number of direct routes that avoid the detours of the gyratory system.

Two short stretches of pavement (on the triangular island in Milton Road and the island in the very centre of the junction) are segregated shared-use, i.e. pedestrians and cyclists have their own clearly marked, separated space. The cycle sections of these are marked with a bright red surface. Unfortunately there is a missing link in the cycle route on the Milton Road island. If you are cycling south along Milton Road using this island, you are supposed to walk your bike for the first few yards. What’s more, the distance you obviously have to walk your bike increased recently when the Council removed a (wrongly installed) square of red paint next to the Zebra crossing marked Z2 on the map.

The remaining sections of pavement cycleway are unsegregated shared-use, and are paved in a much duller red tarmac.

On all these sections it is legal to cycle in either direction, so these pavement links provide short cuts to avoid the gyratory system. Signing has been improved recently, making it clear where pavement cycleways begin and end.

Note that the section of pavement in front of the town houses (from T2 to T8) is another missing link: it is not shared use, i.e. it is illegal to cycle on it. It was deemed to be too narrow for bikes and pedestrians to share safely. This bit of pavement could only be widened if a new lane of carriageway was removed, and all the Council’s traffic modelling showed that this would result in unacceptable delays. Instead, the pavement behind these houses (i.e. on the north side of the houses) has been made shared-use. Obviously this does represent a bit of a detour compared to the alternative route in front of the houses, but at least it makes it possible to avoid the gyratory.

The County Council is planning (as of March 2004) to install an 8m section of shared-use in front of the Jolly Waterman pub (by T1 on the map) to assist cycles to leave the road. (See Lizzie Cook’s letter in Newsletter 51.)

All ten signal-controlled crossings are Toucan crossings which cyclists can legally ride across. (See the Box and ‘Dear Dr Dynamo’ in Newsletter 39 for more about this type of crossing.)

There are currently two zebra crossings, both on Milton Road, where cyclists are expected to dismount and wheel their bikes.

Two additional zebra crossings are being installed where Victoria Road meets Croft Holme Lane. The Belisha beacons have been in place for quite some time but there’s no sign of stripes on the road yet (early March 2004).

Finally, there is one raised table across the link road close to Lloyds Bank. When crossing here you need to watch out for cars coming round the corner from Victoria Road. There are so-called ‘elephants’ feet’ (white square blobs!) on either side of the raised table. Some cyclists have interpreted this as meaning that traffic from Victoria Road has to give way to bikes, but this is not the case, so take care.

Joining it up – sample routes through

Now for some sample routes through the junction.

The most direct route for cyclists travelling from Victoria Avenue to Milton Road is to use the new segregated cycle route across the middle of the junction. The scheme has legalised a manoeuvre that many cyclists previously made via the old zebra crossings.

The first two crossings you’ll pass through, T1 and T2, alternate automatically, controlling the flow of traffic into the junction. This means there isn’t actually any advantage to pushing the button to cross. This is just as well, because the push-button at T2 is in just about the worst possible position for north-bound cyclists.

Many cyclists on Victoria Avenue move to the right as they approach T1 so they can get onto the island using T1.

(One trick I only recently learnt: if T1 is red and you wait at the advanced stop line, as soon as it turns green for traffic from Victoria Avenue, T2 simultaneously turns to green for bikes and pedestrians. So you can cycle from T1’s advanced stop box, across the island, and across T2 in one smooth manoeuvre.)

Once you’ve crossed T2, turn left to follow the bright red cycle lane as it bends round to the right to T4. This light only stops on-road traffic on request.

Once you’ve crossed T4, you will see a give-way line almost immediately that leads you onto Milton Road. If too much traffic is turning into Milton Road, or you would rather cross at a zebra crossing, you can stay on the bright red cycle path on the island, keeping to the left of the barrier fence. But bear in mind that the cycle route stops a few yards short of the zebra crossing where you are expected to dismount and wheel your bike across.

Again, the most direct route for cyclists travelling from Milton Road to Victoria Avenue is across the middle of the junction. However, this gives less of an advantage over the road route than does the reverse journey, partly because the road route is not so much of a diversion when travelling south-bound, and partly because there is no legal way to cycle onto the pavement cycleway from Milton Road!

The red pavement markings on the island just south of Z1 and Z2, clearly indicate where the pavement cycleway starts. South-bound cyclists are supposed to walk the first few yards on the island. Of course, many cyclists ignore this and cycle onto the island from Milton Road.

(What is really needed is to find a way to make this manoeuvre legal. The missing link on the pavement needs to be made shared-use, and a Toucan crossing would help cyclists get to the island.)

Once on the cycleway, the route to Victoria Avenue is to cross at T4 (you may need to push the button to stop traffic), and then follow the bright red cycleway round to the left in front of the town houses and, when you get to T2, wait for traffic to stop. The lights will change automatically here, unlike the final crossing, T3, where again you may need to press a button to stop traffic.

The scheme has opened up a new pavement route for cyclists travelling eastbound along Chesterton Road. Use the crossings T5 and T6 to join the pavement cycleway in front of Staples. (If T5 is red when you reach the junction, you can wait towards the right of the advanced stop box. As soon as you get a green light, T6 will also be green for bikes and pedestrians so you proceed across the traffic island and T6 in a single manoeuvre.)

Take particular care in front of the two entrances to Staples. After you’ve passed Lloyds Bank there is a ‘raised table’ across a short link road. Traffic might be coming round from Victoria Road on your left. Once across this side road, you’ll ride alongside a raised grassy area on your left. Turn left at the end of this grassy area, and then immediately right, so that you cycle behind the tall town houses.

Then use crossings at T8 and T10 (the latter only stops traffic when the button is pushed) to re-join Chesterton Road.

The road route is the most direct one although there are three sets of lights to contend with. T9 and T2 control traffic entering the gyratory so there’s roughly a 50-50 chance you’ll get stopped by each one. T7, at the west end of the junction, only stops on-road traffic when someone pushes the button so is less likely to stop you.

If you are travelling round to Victoria Road on-road, the red cycle lane (between T1 and T7) is only of use to you if you want to cross at the signalled crossings (T7 and T5). Otherwise you should position yourself in the right-hand lane in plenty of time as you approach T6.

The pavement route is largely the reverse of the west to east one described above. Use T9 and T8 to cross to the central island and then turn right and cycle behind the town houses.

(If T9 is red when you reach the junction, you can wait towards the right of the advanced stop box. As soon as you get a green light T8 will also be green for bikes and pedestrians, so you proceed across the traffic island and T8 in a single manoeuvre.)

As you reach T4, turn left and then right after the phone boxes to head towards Staples. Be sure to look to the right as you cross the raised table in front of Lloyds Bank – you don’t have priority. Beyond Staples, use crossings at T6 and T7 (the latter only stops traffic when the button is pushed) to re-join Chesterton Road.

Joining up other links

There are of course lots of other combinations of journeys through Mitcham’s Corner now made shorter by the scheme. For example: 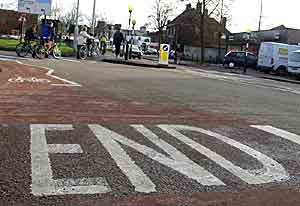