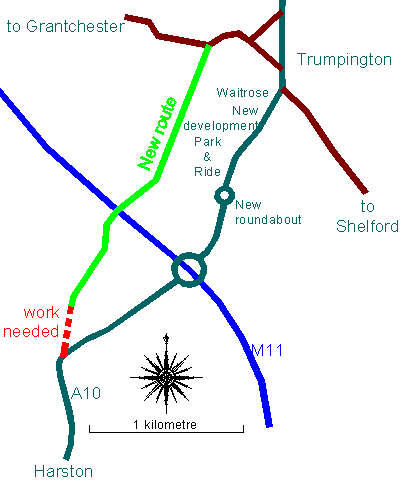 Plans have been agreed by the City and County Councils to build 2,600 new homes to the west and south of Trumpington at Clay Farm and Glebe Farm on the Southern Fringe, and there will also be much development around Addenbrooke’s Hospital. A new roundabout between Trumpington Park and Ride and the M11 will be built to give access to a new road to Addenbrooke’s (but not to create a through route).

However, the old Plant Breeding Institute site, now owned by Monsanto, is likely to be one of the first sites in the Southern Fringe to be developed. Monsanto have virtually ceased work here and, as part of this site is classified as ‘brown field’, housing development may occur here before some of the ‘green field’ sites elsewhere in this area. The development plans include the idea of opening a large area of agricultural land to the public, with the creation of a nature reserve and footpaths by the river on both sides of the M11.

As a local ‘stakeholder’, the Campaign has had some talks with the developers, and it is highly likely that a new cycle route will be created which would avoid both the existing roundabout at junction 11 of the M11 and the planned new roundabout. This route would start just west of Trumpington church and follow the line of an existing concrete access road to the accommodation bridge over the M11. We believe that the parapets of this bridge will already meet the height standards for a cycle bridge. South of this bridge the road skirts some coprolite workings and ends a mere 300 metres from the A10 at Hauxton Mill. Only this last stretch of 300 metres requires any significant work to complete a through route. North of the M11 the route would run between the development and the open space that would stretch as far as the Cam and Byron’s Pool. This route should also offer good access to the proposed cycleway along the ‘Guided Bus’ corridor, to both Addenbrooke’s and to the railway station.

We are asking the developers whether, given that there are now few security concerns over access to their land, it is possible to open this path as an interim permissive route in advance of developments. Cyclists would then be able to avoid the works that will take place on Hauxton Road and enjoy a much more pleasant alternative to cycling alongside the A10. An early opening of this route would be a good public relations exercise for little cost and we hope that this will be seriously considered.