The Protective Headgear for Young Cyclists private member’s bill, by Eric Martlew MP, has received its first reading in Parliament and is likely to be debated again soon. If passed, this will make it an offence to allow any child under 16 to ride a bicycle in a public place when not wearing a helmet. The Cycling Campaign open meeting agreed that this would be a major setback to cycling in Britain, and the Campaign has written to all three of our local MPs asking them to oppose the Bill. Anne Campbell, MP for Cambridge, has replied to say she agrees with us. 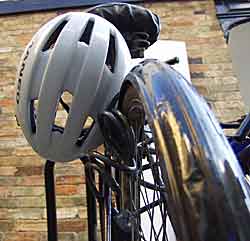 We particularly agree with the National Cycling Strategy board that the scale of the problem of obesity in the UK means that the public health gains from significant increases in cycle use and regular exercise are important. We pointed out that regulations which ‘present cycling as an inevitably dangerous or hazardous activity, or which suggest that helmet wearing should be made compulsory, risk prejudicing the delivery of those very benefits to health and environment which cycling can deliver, and serve to confuse the general public about the wider social and economic advantages of cycling.’ (From an NCS statement.) One of the best ways to make cycling safer is to encourage more cycling (see ‘How to halve cycle accident rates’ above). Anything which makes children less likely to cycle, as this Bill will if it becomes law, will fail in every respect: a less safe, more polluted country with a fatter and less healthy population will be the result.

While we are aware of the benefits which the wearing of helmets may confer (and, indeed, many of us regularly wear them), we believe that compulsion would be counter-productive.

To make your own views clear, write to your MP and Eric Martlew MP about the bill. The address is House of Commons, London SW1A 1AA.