Cambridgeshire County Council has applied to Parliament for permission under the Transport Works Act to construct a guided busway between Milton Road in Cambridge and St Ives along the route of the disused railway. There will be a maintenance track alongside which will be open to cyclists, pedestrians and horse riders. The application says that the track will be 3 m to 4 m wide and we understand that the surface will be of a ‘compacted’ nature rather than tarmac. There are no proposals to provide lighting. Where the track crosses the various roads along the route, buses will have the assistance of traffic signals but cyclists will not, raising the prospect of cyclists having to cross at a time when drivers have a green light. The track will also cross over from one side of the busway to the other at several points. A number of existing bridleways cross the busway, and cyclists following these will have to lift their bike over the raised guideway.

The plans include another guided busway between Cambridge Railway Station and Trumpington Park and Ride Site with a branch to Addenbrooke’s. Again, there will be a maintenance track alongside and most of it will available as a cycleway. Cyclists will, however, be banned from the section that passes under Hills Road bridge and will be expected to use Brooklands Avenue instead. See article elsewhere in this newsletter. Objections to The Secretary of State for Transport by 2 April.

Construction work has started on a pavement cycleway between the villages of Over and Swavesey. The existing pavement will be reconstructed and widened to 2 m. The scheme, which will also include improved lighting, is particularly aimed at pupils using Swavesey Village College. It will link with the guided busway and cycleway at Swavesey.

Changes to road markings are proposed for the A1307 Babraham Road, where an incompetent ‘safety improvement’ last year narrowed the width of the outbound lane on the hill up to Wandlebury and brought vehicles overtaking at 60 mph much closer to cyclists than before. The road is now due for ‘retexturing,’ and, although the carriageway will continue to be as narrow as before, the road markings will be changed to encourage drivers to keep clear of cyclists and make this scary section of road less intimidating. Credit is due to the County Council for realising there is a problem here. But road planners in general still haven’t got the message that making roads narrower might well reduce traffic speeds but it can also make them terrifying for cyclists.

A central island has been introduced on the A1303 at its junction with Bell Road, Bottisham, creating a pinch point which forces cars into conflict with cyclists.

The island improves the safety of traffic turning right into Bell Road, but at the expense of squeezing cyclists. 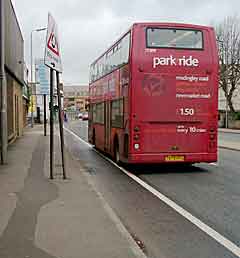 Back in Cambridge, we’ve been told that the inbound bus lane proposed for Newmarket Road between Coldham’s Lane and Abbey Street will be 4 m wide, which would be wide enough for a 1 m cycle lane to be marked out within it. Road widening to create the new lane will take place as part of an adjacent property development and detailed consultation is not likely to take place for some time.

Councillors have rejected proposals for junction changes that would have allowed park and ride buses to use New Square and Fair Street, near the Grafton Centre. Fair Street is an important cycle route from Midsummer Common to the city centre.

A toucan crossing is to be installed about half-way along Brooklands Avenue, to improve access to the new developments there. It will link the very poor pavement cycleways on each side.

Or by e-mail to transportandworksact@dft.gsi.gov.uk .

Email objections will be considered but you must include your name and address and the reasons for any objection. (Cambridgeshire Guided Bus Scheme).