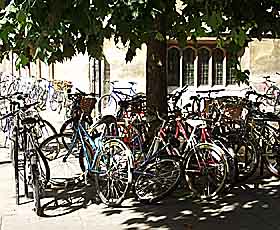 The County Council has been consulting on changes to St Andrew’s Street. Two major development projects will have significant implications for traffic and pedestrians in the area. Together, the Grand Arcade development and the redevelopment of Bradwell’s Court will increase pressure on what is already a busy area. The consultation is in two parts.

Temporary changes during the development of the Grand Arcade

Grand Arcade is a large shopping arcade development which will transform the area behind Lion Yard. Being a large project, it has been a long time coming and it followed the rejection of the retail park planned by Sainsbury’s between Arbury and the A14 back in 1999. (You can read the ‘thread’ of articles we’ve published over the years covering the Grand Arcade on our website at www.camcycle.org.uk/newsletters/threads/grandarcade.html). The developers hope that, if all goes well, the new shopping centre could be open for business by Christmas 2007.

In order to accommodate the construction work, some temporary changes are proposed for St Andrew’s Street for around two years, principally a hoarding to enclose the works. This will take up much of the existing footway in what is already a very busy area. The council therefore plans to relocate the disabled persons’ parking bay and has suggested two options:

The changes were discussed at the Campaign’s September monthly meeting and the first option was preferred. As well as creating a parking bay in a rather incongruous location, the second option would result in loss of cycle parking in an area which has a considerable shortage of cycle parking.

We will also be requesting that the cobbles in the present disabled parking bays are resurfaced, as cycles would be using this area for two years. We feel this is a reasonable request given the high cycle traffic in this area and the length of time.

The consultation will have closed by the time you read this Newsletter and we will have written to support the scheme in general and to give our feedback.

In the longer term, pressure on St Andrew’s Street will increase as a result of the Grand Arcade and the redevelopment of Bradwell’s Court. Bus usage is also projected to increase, despite the well-publicised problems of congestion at Drummer Street bus station nearby due to lack of space.

The Council proposes to prohibit loading and unloading in St Andrew’s Street, north of Emmanuel Street, during 10 am – 4 pm like other areas of the city centre. Additionally, it is hoped that the currently high levels of illegal use of the area by vehicles using it as a through route will decrease. Remarkably, over 50% of cars and goods vehicles in St Andrew’s Street are through traffic not requiring access in the area. Furthermore, there appears to be a fair amount of ‘overranking’ by taxis. All these factors increase congestion which can often spread back into adjoining roads and the bus station.

We were concerned a few years ago that Cambridgeshire County Council wished to see St Andrew’s Street fully pedestrianised during the day. Clearly, with the existing daytime cycling ban elsewhere, that would make access to and through the city centre even more difficult for cyclists. However, our fears appear to be unfounded and we welcome the Council’s renewed commitment to ensuring that this route is kept open.

We have written to welcome the changes and to offer our support for reducing congestion in this area.