Assembly of prefabricated parts for the cycle bridge across the A14 between Milton and north Cambridge means that a bridge structure is now visible for the first time. However, the plan to close the road to roll the span into place, first planned for the weekend of 13 September, and then for a week later, was put on hold again at the last minute – after warning signs had gone up and leaflets been printed. The plan is now to close the road in late October or November. After the span is in place, the ramps and fitting out still has to be completed, so the opening of the new bridge will also slip. January has been mooted, but don’t hold your breath.

We are also told that improvements may be made between the north end of the bridge and Milton Country Park, a route that is at present often occupied by parked goods vehicles. 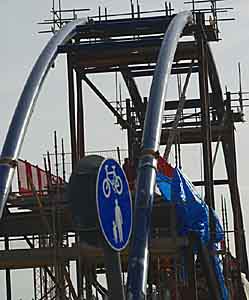