Contractors working on the public toilets on Parker’s Piece have created a nasty visibility problem. They have put up a solid fence around the building, which they say is essential to keep dust and debris inside. However, the fence means that cyclists on the two diagonal paths that meet there cannot see each other. 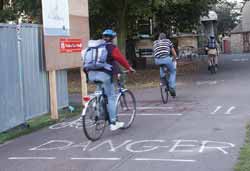 Crude markings were later painted on the path. After we alerted the Council to the problem, the offending corner of the fence was moved in a couple of metres, but as you can see in the picture, there is now a big sign in exactly the previous location of the fence, obstructing the already limited view.

Hopefully that sign will also have been moved by the time you read this. But why does it take so much effort to get little common sense things like this done properly in the first place? Even with the fencing set back, visibility will remain limited for a considerable time. Closure of the main pavement means more pedestrians than usual will be walking in the cycle path. So, on several counts, much care is needed here for the time being.