This article was published in 1996, in Newsletter 5.

After some delay, the report we mentioned in a previous newsletter, Cycle-friendly Infrastructure – Guidelines for Planning and Design was published in February. The Cycling Campaign has one copy so far and is ordering some more (if anyone wants a personal copy, please contact Dave Earl). 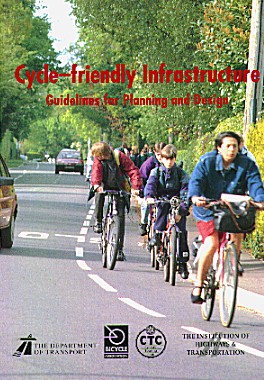 The book is jointly produced by the Department of Transport, the Bicycle Association, the Cyclists’ Touring Club and the Institution of Highways and Transportation, an encouraging if rather unholy alliance! It is the work of several well known cycling campaigners and transport consultants specialising in cycling, together with feedback from local authorities.

The manual describes best practice in providing for cyclists in this country within the existing legislative frameworks. However, it takes some interesting new steps. Primarily, it doesn’t just give specifications for cycle lanes and the like, but takes a starting point that cyclists need to use the whole road network whether parts of it are specially provided or not: “Cyclists do not want cycle facilities per se. They want routes which are fit for cycling – roads or cycle tracks that are safe, convenient and pleasant. This is an important distinction… Provision at junctions, measures on main roads, signed routes… all have a part to play. Function and quality should be the criteria.”

The report approaches this in two ways. First, it identifies a hierarchy of solutions:

In other words, the more specific facilities for cyclists come at the bottom of the list, and measures to address the source of the problem – motor vehicles – come at the top.

Secondly, it identifies different kinds of journey, and especially different kinds of cyclist: vulnerable people, commuter adults and sports adults, characterising them by degree of confidence and speed. (The speeds seem on the high side to me though: for vulnerable people “speed usually below 15 mph” and commuter adults, “reasonably confident in traffic, speed typically 10-20 mph”. I don’t know about you, but I would be pushed to maintain an average of more than 12 mph commuting, and I reckon I cycle quite fast; and I would say a typical cycling speed in Cambridge is around 8 mph.).

When talking about facilities, there are many important points made. For example, all the speed humps and similar described have gaps at the side for cyclists to get through. But have you ever seen such a hump in Cambridge? 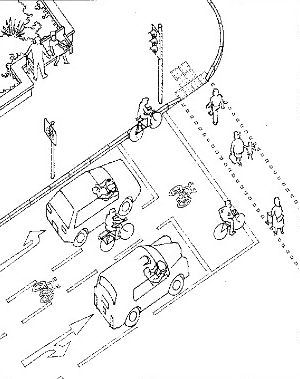 And look at the advanced stop line: in two lanes, the access is up the middle, so you don’t have to cross traffic which might start to move straight on or left as you get to the front. Cycle lanes specify a 2m minimum (most in Cambridge are 1.5m; some are only 1m); and there are details for flush kerbs and so on – nitty gritty details cycle campaigners have been going on about for years with limited success (recent experience suggests engineers in Cambridge have at long last got the message about the latter).

This book is likely to become the “bible” of planning for bicycles in the next few years. And it has been written by cyclists, but with professional and governmental approval, so it may actually have some effect.

Cycle-friendly Infrastructure – Guidelines for Planning and Design. ISBN 0 902237 17 9, Institution of Highways and Transportation, 1996, £15 (discounts for members of CTC). Dave Earl