In June, there was an extra meeting of the Cambridge Environment and Transport Area Joint Committee at which councillors from both City and County councils decided on detailed traffic matters affecting the City. This meeting was held to consider five proposed accident reduction schemes (see Boxes).

The schemes are described as minor in nature, but they particularly affect cyclists and we made extensive representations about them (eight pages of letters in the end). We also discussed the schemes with the officers involved and made a number of site visits of our own and with councillors.

And the common factor? Disappointingly, not one of our comments was accepted in the report to committee. No changes at all were made in response to the consultations. We wonder why they bothered doing a consultation at all.

As a result, some of the longest sections of cycle lanes installed in recent years will be of substandard width. Cycle lanes and paths will be created with restricted visibility, wiggling in and out. Though there was much discussion at the meeting around the points raised, councillors conceded only one point by not agreeing to the build out proposed for Barton Road. Councillors rejected the ‘Think Bike!’ signs along Cherry Hinton Road.

It is not as if we were wholly negative about the proposed changes. There was a lot to support in what was being proposed, and we did offer support. We acknowledged attempts at innovation on King’s Hedges Road, even though we thought they wouldn’t really work. As none of our positive comments were reported to the committee, the Officers’ report made us look wholly negative and obstructive, which was absolutely not our position. This misrepresentation was exacerbated by previous paragraphs reporting ‘substantial local support’ for the schemes (based on responses to tick-box type questionnaires).

With hindsight we should have copied all our letters to councillors. As a result of this experience, in future we will make a practice of sending all our consultation responses to councillors. There is a problem with committee agendas and Officers’ reports: they are only available a week or so ahead of the meeting and, in fact, most decisions are effectively made a few days ahead of the meeting when the political parties have private meetings.

So if we want to make representations on what Officers say, we have only a day or two to do it to have any chance of anything changing. The timetable is also tight for councillors (who are part-time volunteers too): how can they make informed decisions on agenda papers, sometimes a centimetre thick, with only a few days to read them?

We are deeply disappointed with the whole process on this occasion, as we have been on many others. We are disappointed that road schemes which affect cyclists on such a scale are commissioned while ignoring the Cycling Campaign’s considered view. And we are disappointed with the Committee’s apparent willingness to go along with mediocre, below-standard works for cyclists instead of seeking to uphold the highest possible standard of provision in Britain’s premier cycling city. 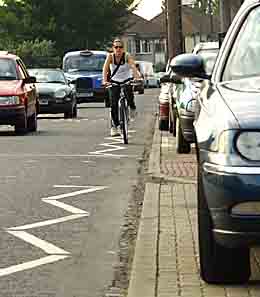 Coldham’s Lane: Cycle lanes in both directions between the Brooks Road roundabout and the Cromwell Road junction; red surfacing where cycle lane crosses junctions; buff surfacing highlighting junctions and on the approaches to pedestrian crossings; planting beds at the junctions renovated or replanted to improve visibility.

We object to the cycle lanes. They are narrow, well below standard. We felt that this was an attempt to use cyclists as traffic calming. Narrow lanes are worse than no lanes here because they run alongside parking bays and there is no buffer between the cyclist and opening car doors. Cyclists know all too well that drivers expect cyclists to stay in lanes, however narrow. Traffic passes closer than it would if there were no lanes because they are seen as separate space.

Again narrow cycle lanes being used as traffic calming (to ‘reduce apparent width’) encouraging close overtaking. While an attempt is made to try mixing off-road cycle ways with side road priority, it does it by wiggling the path on and off the pavement, when what is needed is a straight line.

We objected to the build-out as it forms a pinch point for cyclists on the road and suggested, instead, the removal of two or three car parking spaces and the relocation of signs to improve visibility. We also said we wanted to see speed reduction, for example from interactive signs. We asked for priority at side roads along the Barton Road cycle track. The toucan crossing location is not ideal.

We suggested priority crossings at side roads, and that speed reduction measures were needed, such as a speed camera. We raised several design issues about the crossing, not least its exact location. There will be an opportunity to review this at the detailed design stage.