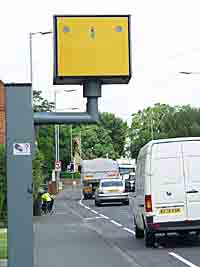 After a court case the government’s decree that speed cameras be painted yellow has been reversed. After the case, brought by the Slower Speeds Initiative and Transport 2000, the Secretary of State has agreed that speed cameras need not be conspicuous, but that such cameras will need individual approval.

The informal cycle and pedestrian access route from Garry Drive to Cambridge Science Park has been permanently closed. Construction of a security fence was due to start in late July. This closes the most direct route to the Science Park from most of King’s Hedges. Cyclists and pedestrians will now have to enter via Milton Road or the new entrance near Cambridge Regional College. This follows the successful appeal by management company Bidwells against the decision of South Cambridgeshire District Council to reject an application to close the access following objections by Cambridge Cycling Campaign, Milton Parish Council and others.

The Department for Transport has announced a one-off £7.5 million award to be made to a single local authority for a showcase sustainable travel initiative. They especially welcome applications from places not already leaders in the field.

We understand that the proposed outbound Newmarket Road bus lane near Coldham’s Lane will not have a cycle lane inside it.

Maurice Leeke, County Councillor for West Chesterton, claimed in a letter to the Cambridge Evening News that lack of action on alternatives to the unsatisfactory cycle lanes in Gilbert Road was because of ‘a lack of money to carry it out.’

In a very welcome safety move, the use of hand-held mobile phones while driving is to be made illegal. The measure won’t apply to hands-free equipment, despite research that showed distraction was a cause of crashes, not just taking hands off the steering wheel. Will the law apply to cyclists too, as it clearly should? It is not uncommon here in Cambridge to see cyclists riding along while on the phone.