The May edition of Which? provides an assessment of nineteen different car bike carriers – six roof-mounted, seven rear-mounted and six towball-mounted.

Of the rear-mounted carriers the Paddy Hopkirk Snowdon, which carries three bikes and costs £70 from www.saveanddrive.co.uk came out best together with Halfords Spare Wheel Cycle Carrier if you have an externally mounted spare wheel. This costs £60 from Halfords (www.halfords.com) and carries two bikes. They had safety reservations about the Thule 973 Backpac which clamps onto the vertical tailgates of estate cars and MPVs.

There are extra costs to be considered for most of these carriers – roof bars for roof-mounted ones, buying the necessary trailer board and extra number plate for those rear-mounted and towball-mounted carriers which obscure the car’s lights or number plate, fitting a socket where the trailer board lead can be plugged in and, most expensive of all, fitting a towbar and ball if you want to use a towball-mounted carrier and haven’t already got a towball. 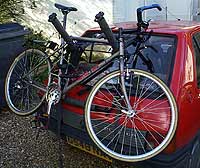 There is much additional information in the full report in the May edition of Which? This is available in the reference section of the Central Library in Lion Yard.