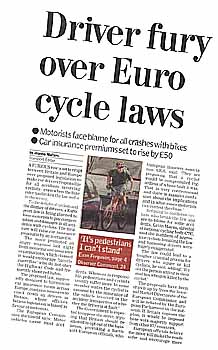 ‘A furious row is set to erupt between Britain and Europe over proposed legislation to make car drivers responsible for all accidents involving cyclists – even when the bike rider has broken the law and is in the wrong.’

That was the beginning of the lead front page article in the Observer on 4 August 2002. Only in the silly season could cycling be front page news. There was, of course, some substance behind the article: three paragraphs in a much longer document from the European Union about how to make it easier to insure your car Europe-wide. There was also some completely ignored good news for all road users in there about protecting victims from drivers who don’t have insurance.

The reasoning behind the proposals, as in other EU directives, is simply to make it easier to function Europe-wide by making the rules the same everywhere. Car insurance varies wildly from place to place, some countries operating ‘no-fault’ insurance and others relying on court decisions. Specifically on cycling, some countries already have a system where car insurance pays out automatically to cyclists involved in a crash.

Many of us reacted in the same way as the press: it isn’t fair to have someone take the blame for someone else’s failings. Personally I think that there are circumstances when this approach is reasonable. For example, because children cannot be expected to take full responsibility for their actions, drivers should have a special responsibility towards them that recognises this fact. I also think that there is a case for certain streets to be identified where the motorist is always assumed to be at fault in a crash. In a Home Zone (see page 11), the street is engineered to give priority to pedestrians and cyclists. If a car is unable to avoid a crash then the driver must, by definition, have been doing something wrong. (OK, there are exceptions, but the point is the reversal of the presumption of fault.)

There is also the consideration that where the balance of power is all on one side – as it is with big, fast, heavy vehicles operating in an environment designed almost completely for them, versus pedestrians and cyclists – there does perhaps need to be some redress in the balance of what ‘fault’ and ‘blame’ means.

But this is all academic, because what the article said was not really true.

Reading the original document reveals that it does not, in fact, propose making motorists take the blame for cyclists’ faults.

The proposal covers only personal injuries, not damage to property. The newspaper articles conveniently left this information out, saying ‘motorists to pay compensation and damages in all accidents with cyclists.’ Even within the narrower aspect of injuries, the scope of this is unclear: does it include compensation or just the cost of medical attention (where, if there is an insurance policy covering the incident, the NHS recovers costs from an insurance company, but provides treatment in any case)?

The quote ‘Motorists face blame for all crashes with bikes’ in the Observer’s front page article simply isn’t true, even if indeed this gets beyond the stage of being a proposal. The proposal does not say anything about fault or blame (in which disputes would still be decided in court), but it does propose that driver’s insurance pays out in a crash. At the moment, a cyclist would have to go through the long, expensive and risky business of taking the driver to court to obtain compensation. The presumption of fault is reversed to reflect the fact in the majority of cases.

The second Observer subheading quoted the RAC as saying ‘Car insurance premiums set to rise by £50’. Where the RAC got this from is not clear. (Perhaps the cost of implementing the whole directive might raise premiums this much?) For the cycling and pedestrian cover clause, the proposal specifically says ‘As far as the Commission is aware, such inclusion of pedestrians and cyclists in some Member States’ legislation does not seem to have had a significant impact on the cost of the insurance.’ Indeed, the amount of legal wrangling should be reduced in such a system. That is one of the big arguments in favour of no-fault insurance generally, as operated in the United States.

So what it boils down to is that the insurance company sues a cyclist when they think the circumstances of injuries are such that they can win a court case (and the cost of taking the cyclist to court is worth it). The cyclist would still probably have to sue to obtain redress for damaged bike, clothing and so on. This contrasts with the cyclist, who does not usually have the backing of a powerful insurance company, currently having to take the motorist to court in order to obtain compensation. What is wrong with that?