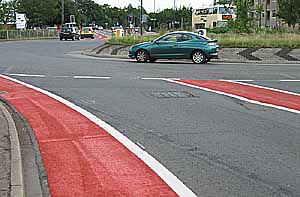 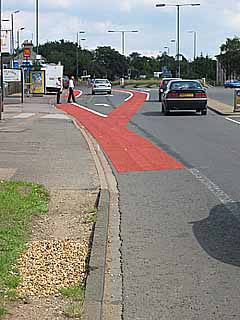 Newmarket Road eastbound: A new central cycle lane has been added on the approach to the roundabout at Barnwell Road. The idea is to make it easier for cyclists heading out of town to get into the correct position to leave the roundabout at the existing central cycle lane on the far side. Using cycle lanes in this way at roundabouts is a new idea and we will be watching to see how well it works in practice. Unfortunately the new lane starts too close to the roundabout, forcing cyclists to make a sharp right fork across the traffic. It should have started further back, at the point where the road starts to widen from one lane to two, allowing cyclists a much smoother movement into it.