The popular series of local cycle route leaflets, describing rides around the Cambridge Green Belt area, has recently been updated and reprinted.

There are five routes, each with a different theme, and highlighting interesting places to visit: 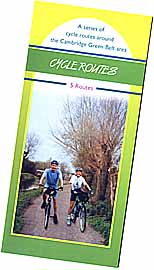 The pack of route leaflets, together with a summary leaflet and a Cambridge Cycle Route Map, costs £2.75, and is available from the following: