There has been a lot of cycleway construction in the Newmarket Road corridor over the last year and, although a bit more is planned, now is a good time to review the completed projects. The two major new sections are the off-road Jubilee Cycleway from the Green Dragon Bridge to Newmarket Road Park and Ride site (Sustrans), and the shared-use path from the Airport Way-Newmarket Road roundabout to Bottisham, via Quy (County Council). There is a related but disconnected section from Lode to Swaffham Bulbeck, and the City Council has upgraded the shared use path beside the Newmarket Road cemetery between Ditton Lane and Marshall’s.

Taken together, all of this amounts to a significant new set of options for cyclists on the east of Cambridge. There is now a continuous, high-quality, off-road cycle route all the way from Bottisham to Jesus Green, and although some bits let it down a little, on the whole it is a good example of a radial cycle route. It is, of course, now part of the Sustrans National Cycle Network – NCN51. 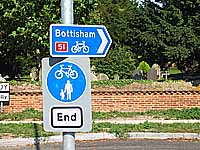 The signposting of the Jubilee Cycleway at the Park and Ride site is useless. There is no clue at all to anyone to go out of the back of the car park rather than the front entrance. The cycleway entrance itself has a small map but no directional signage, so whilst the huge bike is a clue, a newcomer is unlikely to realise this is the way to the centre of town, because it doesn’t look like it. There is in fact one sign at the car park entrance but it is only visible if approaching from Cambridge on foot or by bike. No-one arriving from out of town is likely to spot it. Clear signs visible to cyclists leaving the Park and Ride or coming from Quy are needed at the entrance, near the bus stop, and at the start of the Jubilee Cycleway. One recent visitor to Cambridge also pointed out that all the signs on NCN51 coming back out of town say ‘Bottisham’ which of course meant nothing to him. They need to say ‘Park and Ride’ too to be of any use to tourists.

Beyond the Park and Ride

As the Jubilee Cycleway was covered last month, this article mainly looks at the out-of-town section.

This short section of shared-use cycleway is constructed to a high standard. The surface is smooth, the width is good (because it is not divided into pedestrian and cycle parts), it does not dip at the one driveway crossing, the kerbs are flush, street furniture has been moved out of the way and there are flush access points for roads opposite. However it still suffers the perennial drawback of pavement cycleways in Cambridge: at the first side road crossing cyclists are expected to stop and give way.

An interesting new feature is a 10 m long flush kerb at the Marshall’s end for rejoining the road or turning right into Meadowlands Road. It is not really flush – most of it is about 10 mm – but John Isherwood tells us this is to stop water pooling and causing an ice hazard in winter. Also cyclists will not be going up it at a shallow angle. The section at the end for cyclists continuing on the shared use is quite flush. But the flush access points for roads opposite shouldn’t be directly opposite but some 50 m-80 m earlier so that cyclists can rejoin the road and correctly position themselves for a right turn. The existing drops assume the cyclist will stop, wait for a gap in the traffic and then cross (a ‘Dutch’ right turn). In practice, the various drops are close enough together that a sensible cyclist will just use the previous one so it’s not a major problem.

So we have a route that suffers from fewer problems than in the past: it is generally wide enough, smooth, well-aligned, well-signposted and has some good crossings of major cross-routes. City Council construction has significantly improved and Sustrans construction is good. Let us hope that the County Council can learn to do better.

However it also has a number of failings on the out-of-town sections, some serious: very poor crossings of more minor routes, poor road access, a host of non-flush kerbs, some gratuitous narrowings, some confusing signposting, and it’s only on one side of the road. The key problem is priority-at-side-roads and must be addressed. Someone will get flattened on one of these junctions eventually. It won’t be me because I know better than to use them, but all the inexperienced cyclists the new route is attracting may not. Overall I think we can give this route 8/10.