Clare Macrae and Jim Chisholm from the Cycling Campaign, the City Council’s Cycling and Walking Officer Clare Rankin, and Simon Nuttall for the Cycle Theft Reduction Project met WAGN’s Ivan Spratt and Cambridge Station Cycles. We talked about short-term measures for improvements for the station area. The delays to the long-term redevelopment plans mean that cycle parking will be under pressure for much longer than we originally thought, so some changes cannot wait.

We were very pleased with the positive attitudes and suggested actions among which were more and possibly managed parking racks and possibly making a better way through the Station car park alongside the existing buildings (above).

It now appears that a public exhibition of the major redevelopment proposals for this area will not now happen until the autumn. 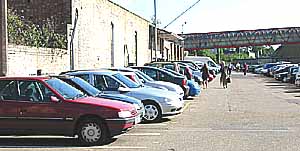