Campaign members are invited to join our members’ email discussion list, which tends to average around two to four messages per day. You can opt to read messages by e-mail, on the web, or in the form of a daily digest. To subscribe, send a message to:
camcycle-subscribe@yahoogroups.com or see www.camcycle.org.uk/membership/discussion.html for more information.

Cambridge City Council is about to start consulting on the ‘Cambridge Walking and Cycling Strategy and Action Plan’. A copy of the public consultation document should be distributed with each printed copy of this Newsletter. More information is available from Clare Rankin on 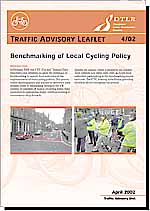 A six-page report on the CTC’s ‘Benchmarking of Local Cycling Policy’ project has been published. The Benchmarking process involves up to 10 local authorities in peer-review of cycling policies and provision. Cambridgeshire County Council was one of the first authorities to be involved in the process. The report (known as ‘Traffic Advisory Leaflet 4/02’) is available from: www.nationalcyclingstrategy.org.uk/html/traffic_advisory_leaflets.html

According to quarterly traffic statistics released by the Department of Transport, Local Government and the Regions, ‘pedal cycle traffic’ fell by four per cent between 2000 and 2001 (comparing figures for the first 3 months of 2000 with the first three months of 2001). Car traffic levels rose by about three per cent, according to the same comparison. That rise partly reflects the impact of the foot and mouth disease on traffic early in 2001. Even so, it is estimated that the underlying rate of growth in motor traffic continues to be about 1% to 1.5% per year.

In Newnham, the ‘cattle creep’ tunnel under Fen Causeway has been done up and surfaced it’s intended mainly for pedestrians but cyclists can use it, although the slopes to and from the towpath are unsurfaced.

Anglia Railways has completed the installation of secure cycle parking and storage facilities at all its stations which was achieved through £75,000 of RPP funding from the Strategic Rail Authority. Over 520 cycle parking spaces have been installed four at each station. Anglia have done much to encourage cycling to stations, with a leaflet detailing its cycling facilities with details about taking bikes onto the train, how to book, and fares. A guide titled Around the Bittern Track details nine cycle routes around the Norwich to Sheringham Bittern Line using a variety of quiet roads and lanes.

The guide costs £1.00 or is free when booking a bike onto an Anglia Railways train.

There are now footbridges across the ditches on Grantchester Meadows, creating a riverside path; this is of interest to cyclists only in that it will take pedestrians off the cycle route to Grantchester.

The Jubilee Cycleway, Cambridge’s first Sustrans route, is not yet completed. As cattle are to return to the commons, gates (which we believe are temporary) have been installed prior to the completion of the permanent cattle grids and parallel gates for pedestrians.

Construction work for a new building on Tennis Court Road has resulted in a temporary footway which narrows the road. Initially the arrangement narrowed the road such that large vehicles were forced into the contra-flow cycle lane. Following complaints to the City Council and the contractors, the arrangements have been revised. Apparently, relevant permissions were agreed with the City Council. We would have hoped the needs of cyclists would have been more carefully considered before allowing such a situation.