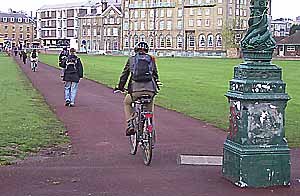 The pedestrian- and cycle-path from Mill Road to Regent Street has been resurfaced in red, at last obliterating a confusing central white line that was left over from a long-abandoned scheme to segregate cycles and pedestrians. The result is a noticeable improvement on the previous pot-holed surface, but because this was a cheap and cheerful ‘slurry seal’ and not a full resurface, the result is still quite bumpy. This is one of the busiest cycle paths in Cambridge, and deserves better. 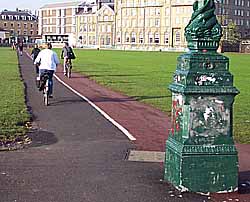 We very nearly ended up with a cycle path of half this width. The contractors originally surfaced only one side of the path, and redrew the central white line. Fortunately, when we pointed this out to the City Council, they issued fresh instructions to the contractors and the red surface was extended to cover the whole path and the offending white line. The other diagonal across Parker’s Piece will not be resurfaced; not enough money, we have been told.