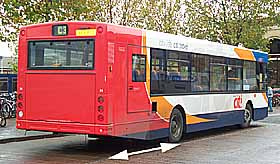 By the time you read this there should be about 30 new buses operating Citi routes throughout Cambridge. These new buses are very long: 12 metres rather than the 10 metres or so of most existing vehicles. More important, for the safety of cyclists, is the large rear overhang of some 3.5 metres and the lack of experience of many bus drivers. When such a vehicle makes a sharp turn in a confined space the driver may apply full lock from stationary and then move off. This causes the rear of the vehicle to move sideways in the opposite direction to the front. This rear kick out can be as much as 0.8 metres. The bus driver is not always aware of this danger – I’ve witnessed a bus damaging the side of a stationary car like this, and the bus driver denied it could be his fault as he was turning in the opposite direction. In other countries, some articulated buses are ‘wedge shaped’ at the rear to minimise kick out. I’m not convinced that these Citi buses are the best option for many of our city and estate roads, and I’m told that similar buses have themselves suffered rear-end damage when turning.

Make sure you don’t get trapped by the kick out!