Thank you for the opportunity to present Cambridge Cycling Campaign’s petition to lift the City Centre daytime cycling ban in St Mary’s/Market Street, and in Sidney Street.

Cambridge Cycling Campaign seeks to represent the whole range of Cambridge cyclists – old and young, experienced and inexperienced, fast and slow. We have about 700 subscribing members drawn from a wide range of age groups and social backgrounds. The campaign argues that the ban is outmoded and unnecessary and that it should now be brought to an end. 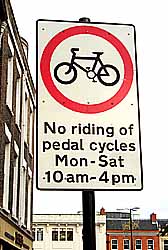 Contrary to the view expressed in paragraph 2.12 of the papers for this meeting, considerable concern was expressed about the cycling ban during the recent series of Pedestrian Zone review workshops.

Cambridge Cycling Campaign asks you to support the ending of the ban in both streets. Here are some of the reasons why we make this request.

It is important to stress the obvious point that in Cambridge a high proportion of people cycle and that every day a very high percentage of those arriving in central Cambridge do so by bicycle. Every additional person encouraged to come by bicycle eases the very great pressures on public transport and on the overburdened city road system and every person discouraged from cycling increases those pressures. It is not just in the interests of cyclists that cycling should be encouraged: it is, we believe, in everyone’s interests.

Cycling in Cambridge should be actively encouraged. Current city centre rules, especially the cycling ban, tend to discourage cycling and to make cyclists feel unwelcome. Nationally attitudes to cycling have become much more positive during the last decade and we think that the time is ripe to adopt a more cycle-friendly policy in Cambridge city centre and to signal this by ending the ban.