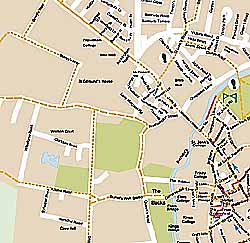 We are pleased to announce that the long-vacant Campaign post of Press Officer is now filled. Sam Davies, who has been cycling in Cambridge for around ten years, is head of communications at Analysys. She will be looking for opportunities to generate publicity (as well as rebutting stories in the Evening News). The May monthly meeting co-opted Sam to the committee until the next AGM.

This issue marks our Sixth Birthday. The Campaign was launched during National Bike Week of 1995, and has since grown to around 675 members.

The latest edition of the Cambridge Cycle Route Map is now available on the County Council web site [PDF], as a single large image. Hopefully a key will be added at some point, to indicate the meaning of various styles and colours. 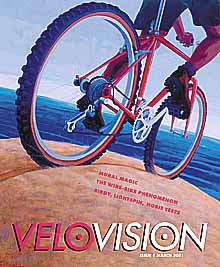 Velo Vision is a new quarterly magazine ‘celebrating cycle culture worldwide’. As a special offer for Cambridge Cycling Campaign members, the publisher has agreed to offer subscriptions at the pre-publication prices, about a 20% reduction. Four-issue subscriptions cost £20 rather than £24, two issues £10.50 instead of £12.50, and you can get a trial issue for £5.50 rather than the usual £6.50.

We depend on two Royal Mail postal services: a PO Box and a FREEPOST address. In recent months the service reliability has deteriorated noticeably. (We even received four first class stamps as compensation once!) The last straw, however, was when almost all the post for the entire month of April arrived on 30 April. Needless to say we shall be asking for more than four stamps as recompense. If you are concerned that something you sent us might have been lost, please get in touch.

The London to Cambridge Bike Ride this year is on Sunday 22 July, in aid of the charity ‘Breakthrough Breast Cancer’. Last year 4,200 cyclists rode the 54 mile route, raising over £100,000. The route starts at the Lee Valley Leisure Centre, finishing at Midsummer Common. If you aren’t able to join the ride, I recommend going to the finish to enjoy the festival atmosphere.

The North Sea Cycle Route, which at 6000 km is claimed to be the world’s longest signed international cycle route, opens in June, with the UK launch ride taking place in May and June (Foot and Mouth Disease permitting). The route encircles the North Sea, passing through seven countries: the Netherlands, Germany, Denmark, Sweden, Norway, Scotland and England. The UK stretch runs from the Shetlands down to Harwich.

I cycled through Girton a couple of days or so ago and was disappointed to see that the new pedestrian lights are being put up on a build-out which leaves not enough room for two cars and a cyclist. I watched a car having to slow down behind a (very fast) cyclist in order to get through the gap.