Until recently, readers could have been forgiven for wondering whether the National Cycling Strategy had been rather forgotten since its launch in 1996.

In fact, much work was being done behind the scenes by the National Cycling Forum (NCF), which is overseeing implementation of the Strategy.

However, in recent months there has been much more visible activity. First, there was the appointment of AEA Technology (yes, the Atomic Energy Authority) to promote the Strategy. This was followed by the launch of a web site. The References and Links section here is a very useful resource indeed.

Earlier this year there was a series of regional seminars entitled ‘Cycling – the way ahead’. These were intended to convey cycling’s transport role to key decision-makers such as business leaders, politicians, council staff and so on.

The Eastern Region seminar took place in Cambridge on 10 April. Local attendees included many officers from Cambridgeshire County Council, and several members of the Cycling Campaign. Sadly there was nobody from the City Council there. As further evidence of the increased promotion of cycling, a specially produced video was shown, entitled ‘Cycling Sense – a fresh view of cycling’. The day finished, rather predictably, with three licensed hire cars parked in the mandatory cycle lane on Grange Road to take delegates back to the railway station. The drivers told us (wrongly) that they could not wait round the corner because there were double yellow lines – so it was better to block the cycle lanes. 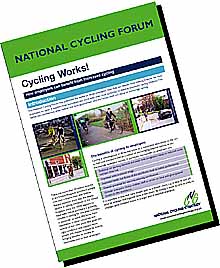 Since February there have been no fewer than seven new publications from the NCF:

And most recently, we have heard that a new job is being advertised – for someone to run the National Cycling Forum one day a week.

DETR (national) statistics just published show that pedal cycle traffic fell by two per cent between 1999 and 2000 after a rise of five per cent in the previous year. Part of the reason for the fall was the wet weather in 2000. These figures are far better than those typical of ten or twenty years ago, but well short of the targets of the National Cycling Strategy.