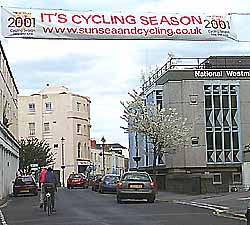 Every Spring and Autumn two national cycling organisations, the CTC (formerly the Cyclists’ Touring Club) and the Cycle Campaign Network organise a one-day national conference for cycle campaigners. So I recently headed to the Isle of Wight with fellow Campaign member Myra Van Inwegen. Here are some of the useful snippets of information gleaned on the day.

The Home Office is currently reviewing the Victim’s Charter. Neither of the two previous versions included road traffic victims. Nor does the new draft. However, it does ask the question ‘Should a new Charter include road traffic incidents which lead to death or serious injury?’ You may wish to reply (by 15 June).

The Transport Act 2000 allowed (paragraph 268) that ‘A local authority may designate any road for which they are the traffic authority as a quiet lane or a home zone.’

In February this year the CTC and others forced Provident Insurance to drop its negligence claim against the parents and childminder of 12-year-old Darren Coombs who was in collision with a car whilst riding his bike four years ago. The CTC has now set up a Cyclists’ Defence Fund to fight severe injustices against cyclists, and is seeking donations. Cheques, made payable to CTC Cyclists’ Defence Fund, should be sent to CTC, 69 Meadrow, Godalming, Surrey GU7 3HS. To set up a regular contribution or join the Cyclists’ Defence Network, call 01483 417217 or email defence@ctc.org.uk.

There is to be a major change to local authority funding. Instead of separate government grants for each area, there will be a Single Capital Pot. This means that Transport will be in competition with Housing and Education. This free-for-all casts doubt upon how far recent forecasts of high levels of funding for transport can be believed.

Following continued concern over the poor standard of many new cycle facilities throughout the country, the Cycle Campaign Network has launched the Campaign for High Standards. Campaign groups are called upon not to endorse low standards. The minimum criteria advocated are:

Up to five days of free consultancy advice is now available to schools, businesses and other organisations wanting to develop a travel plan. Organisations and schools who apply and are accepted onto the programme will receive up to five days of an adviser’s time free of charge. The advisers will work with clients to help them with specific travel plan tasks and to overcome any problems that they face in getting a travel plan up and running.

Sustrans’ Safe Routes to Schools web site includes examples of what schools around the country have been doing (none in Cambridgeshire are listed yet).

The Department of Environment, Transport and the Regions (DETR) has a set of web pages packed with information about School Travel.