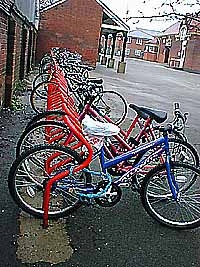 In April the first tangible evidence of a long-standing Cycling Campaign project should appear when seven different types of cycle rack are installed in the city centre. The six-month long experiment is funded by a Home Office targeted policing initiative and is part of a project, run from Parkside police station, that aims to reduce cycle theft in the city.

Seven different types of rack will be located around the Guildhall, in Peas Hill, Fisher Square and on Christ’s Pieces. Most of the racks are based on the ‘Sheffield Stand’ design that is so popular with cyclists. The experimental racks will replace the much-hated vee-grips, notoriously known as ‘wheel benders’, which are found all over the city. Those racks are so despised by cyclists that planners have been sent a strong message: ‘Give us Sheffield racks’.

Although Sheffield racks are excellent for secure cycle parking they do have some problems. Anyone who has to park their bike at the railway station will know that, when they are placed too close together, they are very difficult to use. Also, when there is nothing to stop the front wheel from turning, the lock can ‘walk down’ the leg of the stand and the bike will fall over. I do not believe problems like this can be solved with one type of ‘universal’ cycle stand.

Over the last three months I have scoured a huge pile of catalogues and innumerable web sites. There is an amazing variety of cycle stands available and it seems that anyone with a welding torch, some spare tubing and a pipe bender will have a go at designing them. I have rejected a large number of dangerous, complex designs that are just inappropriate for use on the highway. One that seemed very clever involves a vertically moving stainless steel arm. At each end of the arm there are sleeves that wrap around the down tubes and seat tubes. The arm is moved down, locked in place and appears to hold the bike firmly and securely. Alas, the designers forgot that tyres can be let down and this releases the bike frame just enough to allow it to be wiggled free. 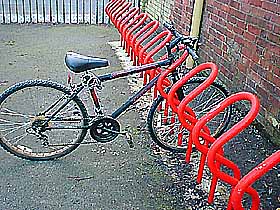 In selecting stands for the experiment I have avoided anything with moving parts and only included those racks to which the bike frame can be locked. With children’s bikes in mind, I have requested an additional horizontal bar on some of the Sheffield stands.

One of the chosen designs takes up hardly any space when not in use – a crucial feature in a busy city centre. Another provides high-density cycle parking, but cleverly does not hinder the process of securing the frame properly. How well these work in practice will be tested in the experiment.

Use of the racks will be monitored over a six-month period, and will result in recommendations for more stands in other parts of the city.